I suppose I should count my self lucky on a few counts with this issue, firstly I don’t live in Melbourne, secondly I don’t rely upon reticulated water and thirdly I am not going to have to pay for a useless Desal Plant for perpetuity even though it does not work and its hopelessly late coming on line.

What amazes me is that that this quango is even contemplating taking time to repay the money it owes its customers for the overcharging, The morally correct thing to do would be to just discount the next bill by the amount that each consumer has been overcharged previously, frankly I tend to think that Ted should just tell the builders of the Desal plant that They can take their energy hungry plant at Wonthaggi and stick it where the sun don’t shine and as they have failed to meet the terms of their contract that they will just have to wear the loss. Essentially the Victorian government should just wash their hands of the whole climate change inspired madness of drawing upon the sea as a source of potable water for Melbourne.

Let’s go for a f*ck walk 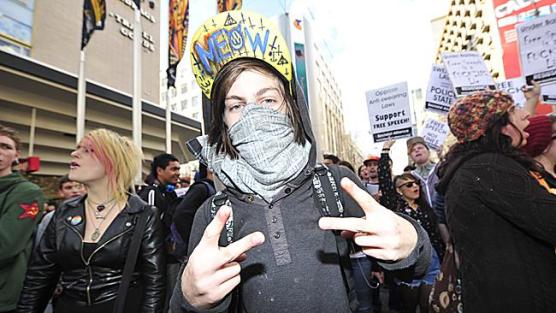 This protester was worried his mum might recognise him.

So it’s Saturday afternoon in Melbourne’s winter and you’re a teenager. What the hell is there to do? If you’re not into playing footy (or going to a game) the choices can be pretty limited. Not enough money to go skiing in the mountains? Okay, why not wander into Acland or Chapel Streets and have a latte (or beer) with your mates? For the outer suburbanite there’s always the shopping malls to hang out in.

But, if you’re into a bit of passive exercise and want to let off some steam (I mean, life is so stressful for kids, isn’t it?), why not go for a walk? A protest walk in the city. You know, to stir up a bit of attention and mouth off at authority, wouldn’t that be cool? Now, what cause is worth supporting? Gay marriage or the right to dress like a slut? Nah, done all that.

Hmm, what is FaceBook recommending? Err, what … A FUCK WALK? That sounds pretty good:

HUNDREDS of potty-mouthed protesters hurled or wore obscenities in defiance of new police powers allowing crude outbursts to be slapped with an instant fine. The aptly-titled “F… Walk” saw up to 400 people – mainly teenagers – chanting profanities and calling for free speech, not fines in a march through the CBD today.

According to the organiser, 23-y.o. Reubin Williams, “the walk was designed to highlight the difference between swearing as a part of expression, and anti-social, offensive or violent behaviour.” Thanks for explaining that Reubin:

“It’s a freedom of speech issue,” Mr Williams said. “I feel restricting people’s language is unnecessary and the extent of the fine is ludicrous.

“You can swear without being a lout, and it doesn’t mean we are going to be breaking windows or be violent,” he said.

“If you do stub your toe and swear they can fine you for it, but that’s not to say they will.

“Police are saying they’re not using it for those circumstances, but they can and that’s concerning.”

“The Government already has too much control over our lives, so controlling what we can say is a step too far,” he said.

Quite frankly, I am not a great supporter of the Baillieu government’s window-dressing attempt to crack down on law & order either. It’s not exactly striking at the heart of our street violence problem, but what else would you expect from a government that so far has proven to be underprepared to instigate any meaningful reforms?

However, when you look at this new law in isolation is it really an attempt to stifle free speech? And does it, as some critics have suggested, discriminate against younger people because (surprise, surprise) they are the group that tends to spend more time on the streets and, therefore, the ones more likely to be fined … and the least able to afford them?

Firstly, as Reubin himself points out, the law is not aimed at fining people for using profanities in non-threatening, non-anti-social ways. In my opinion it’s more about curbing loutish, drunken and/or intimidating public behaviour, especially in crowds, like at footy games. You know, the things that can lead to brawls and even riots. So why encourage young people to go into the streets and behave like louts, Reubin?

And secondly, to claim it discriminates against young people because there are more of them on the streets is a bit like saying road laws discriminate against taxi drivers because they spend more time on the roads.

Oh yeah, young people have far less freedom and are far more subject to heavy-handed police enforcement of social behaviour laws than what they were 20, 30 or 40 years ago. Haven’t you noticed? I mean, when young people went onto the streets like this to protest trivial matters like the Vietnam War, conscription and even the right to protest (in Queensland’s case) – while older drunks standing outside the pubs hurled obscenities at us like “get a f*cking job you long-haired hippy” – the police would just stand back and not use their batons against us wouldn’t they? They wouldn’t drag us off into paddy wagons with a few stiff kicks and belts around the ear either and we wouldn’t end up facing the Magistrates court in the morning. Like hell they didn’t.

Yes, young people have it so tough today and those police are just arseholes and really hate our youth They’re pigs – how very dare they seek to crack down on truly anti-social behaviour.

Maybe Reubin, for his next trick, should organise another protest march against proposals to crack down on FaceBook and other social media sites that harass and harm others. I mean, it’s all in the name of free speech and the law has no right to protect innocent victims and bystanders from such vile behaviour.

I suggest you take up footy, Reubin, and take your frustrations out there on the field on a Saturday afternoon instead of on our streets … if you’ve really got any balls that is.