an elephant in the room

GD  asked me to post this new background picture here at the Sandpit that I chose to replace my sixties  flashback inducing geometric number so naturally I am obliging because I’m just that sort of guy.

It is very wet and squishy around here at present.

Frankly I am totally sick of  the wet weather here and every new wet day makes our grass look more like  jungle, mould is sprouting in the most unexpected places  and I am just so over the mud…

Rain on the mountain

A week ago I was worried about the possibility of  bushfire and now everything is soaked here after a couple of days of steady rain, but hey, I like the rain it makes things grow and growth is good , right?

If there is one thing that you can say about this country it is the place never lacks surprises when it comes to the weather of course there is a downside to the rain and the subsequent growth it brings and that is the need to mow which is the curse visited  upon all home owners . I used to love mowing but nowadays its just something that has to be done. Now if only I get lucky and get a good day weather wise to coincide  with one of my all too infrequent good days back wise all will be sweetness, light and garden bliss.

Its even been rather hot here on our usually slightly cooler mountain abode and like every other sensible person I have sought to get through that less than salubrious weather as best I could. I have not however succumbed to the silly notion that the current heat wave is a sign from on high that we are experiencing the wrath of the deity in the from of “global warming”  and thankfully Miranda Devine’s column has a rather timely reminder that such heatwave are far from unprecedented  in this country:

Sir John Henniker Heaton kindly recorded it all for us in 1879 in the Australian Dictionary Of Dates, which a reader has provided.

It is an invaluable primary resource, as you will see. (I have translated temperatures from fahrenheit to celsius).

December 27, 1790: “Great heat in Sydney, 39C in the shade. Settlement visited by myriads of flying foxes, birds dropped dead from the trees.”

February 10 and 11, 1791: “On which days the temperature at Sydney stood in the shade at 41C, the heat was so excessive at Parramatta, made worse by the bushfires, that immense numbers of the large fox-bats were seen to drop from the trees into the water, and many dropped dead on the wing.”

Heaton quotes from The Sydney Gazette of November 29, 1826: “The heat and hot wind of Saturday last excelled all that we ever experienced in the colony. On board the Volage man-of-war (a naval vessel), in the shade, the thermometer was 41C, and on the shore it was, in some parts of the town, 38C, and in others 40C.

“To traverse the streets was truly dreadful, the dust rose in thick columns, and the northwest wind, from which quarter our hot winds invariably proceed, was assisted in its heat by the surrounding country being all on fire, so that those who were compelled to travel felt themselves encircled with lambent flames. Sydney was more like the mouth of Vesuvius than anything else.”

Again from The Sydney Gazette, February 21, 1832: “Saturday was one of the hottest days ever remembered. The recent rains having saturated the earth, the atmosphere was impregnated by an aqueous vapour not unlike steam issuing from a boiler, while the sun poured down all the fury of his heat. It was dreadful.

“Man and beast groaned beneath the oppression, and numbers of working oxen dropped down dead on the public roads.”

The bullocks were even worse off on Saturday, March 18, 1832, which The Sydney Gazette reported was “insufferably warm. At 1pm, the thermometer was 54C in the sun. The cattle suffered much. Working bullocks dropped dead.”

Of course it was much hotter in Central Australia.

I am also rather drawn to note that in the northern hemisphere there has been experiencing rather harsh and unpleasant “cold snap”   Oh but of course the Warministas will insist that colder winters are “just weather” where as a heatwave is  evidence that AGW is real and happening now.

The global climate is extremely variable now if only the Warministas could work out a way of credibly discerning the amount of the human activity signal in the data they might just be more convincing. As it stands I am very firmly of the opinion that when one steps back from the alarmist claims and look at the bigger picture that there is nothing unprecedented about this heat wave at all and certainly not enough evidence to claim that it is anything other than an example of “weather” .

Throw another Greenie on the Barbie…

Ah those loveable Greenies have blood upon the hands once again as the stories of how they made hazard reduction burns for all intents and purposes impossible to  get at the time when they could have been carried out safely:

Mr Arnold applied in August 2011 for a permit to spring burn some of the build-up of weeds and scrub undergrowth beneath blue gums covering Steele’s Hill that runs the length of his now-blackened 1000ha property.

He said it would have been a nice and steady little fire after winter that slowly crept through the bush, destroying the high fuel load.

He was knocked back because Steele’s Hill and its blue gums contained a wedgetail eagle’s nest and was classed as foraging habitat for the endangered swift parrot.

“I took that to mean that the bird might call in for lunch occasionally,” a frustrated Mr Arnold said yesterday.

“But I look at the devastation there today and ask where the Greens are? But they are more concerned about the pattern on their cappuccino in Salamanca than what has happened here on our farms this week.”

Mr Arnold said he could not say for sure that if he had been allowed to burn off Steele’s Hill in the springs of 2011 and 2012, that the bushfire could have been stopped on his farm before it roared down into the small Connelly’s Marsh beach community destroying more than 15 homes.

Its a story that we have heard before in relation to the terrible fires in Victoria a couple of years ago and I expect the very same lily livered  counter arguments  this time as we that were so unconvincingly mouthed then . We live in a nation that is covered with very flammable eucalyptus trees and we very clearly have a price to pay if we don’t have a fire  management regime that acknowledges that the only way to keep our homes  and our lives safe in the burning time is to reduce the fuel loads when it is safe to do so.

Maybe the only way we can do this is to throw another Greenie on the barbecue so that they will know what the people on the fire-fronts  have experienced…. Hmm  what is the best barbecue  sauce for long pig again?

The next leader of the opposition, or could Brother Number One rise again from the ashes of a Labor defeat?

Well this comrade has awoken in 2013 in good spirits having had a reasonably (for me) good night’s sleep and as no alcohol passed my lips last night I probably feel a bit better than most hangover sodden creatures this morning. As is my usual  practice in the morning I was checking out the mumbling in the Fairfax press when I cam across yet another piece that was off their usual pro Labor  message. I know its the silly season but if they keep this sort of thing up they might even be on the road to the sort of situation that sends shivers down the spine of every latte sipper. They might even achieve some more balanced reporting in their opinion pages . 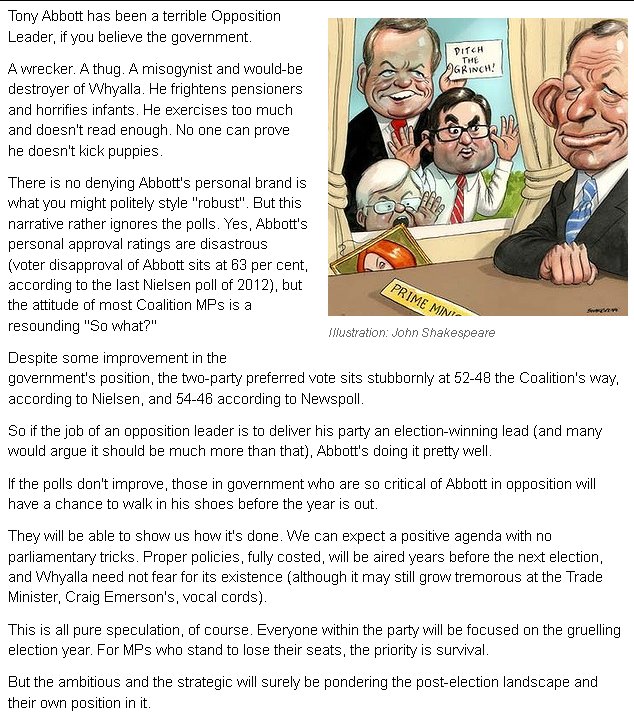 Yes I know that normal transmission will resume shortly but allow me the indulgence of enjoying what is being presented now and the the further indulgence of wondering just who will lead a dispirited, dishevelled and much diminished Labor opposition. I won’t be Gillard or Swan because if either retain their seats they will try to hide from the world on the back bench until they can quietly resign their seats and leave politics. Frankly I think that Combet has all of the charm of a depressive undertaker and Bill Shorten is just a bit too smarmy to be viable. That just leaves that long time favourite of this blog Brother Number One (Rudd). You see I think that he has a big enough ego that he would want to be remembered as the man who twice saved Labor from the electoral wilderness and I also think that he would be up for the challenge because unlike the other contenders he is already on the reserve benches and therefore being leader of the opposition will be a step up rather than down for him.

My Good friend Ray, being a confirmed Ruddite  will be delighted, OK maybe not delighted that Labor will have been defeated, but at least hopeful that under the risen Brother Number One Labor will be at least  able to see the edge of the wilderness and  the path to resurrection. It won’t be much comfort  but a small comfort is far better than total despair that will be the lot of so many Labor supporters after the next election. 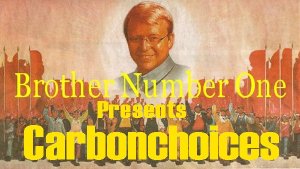 Can he rise again?

A pleasant surprise in today’s Age

The Age is usually such a rabid AGW advocate but maybe this is the start of a new more balanced approach to the issue of climate change. Maybe its just a the removal of the execrable Jo Chandler from their staff that has seen them mellow, most likely its just a reflection of the fact that the interregnum between Christmas and new year is a time when regular writers are away on leave and the need for copy to fill the paper allows them to cast a wider net than usual. No matter what the reasons for its publication I found the piece by John Spooner most refreshing and worthy of praise: 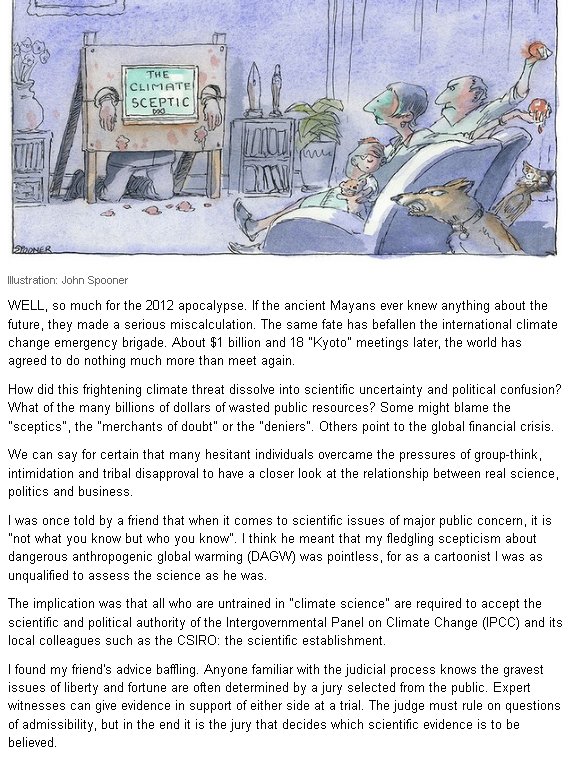 I hope that the real reason that this piece has got such a prominent place in today’s Age is that the minions at Fairfax are finally realising that they have hitched their faith to a false religion and that its apparently golden idols are nothing but  tat and cheap wax,  that the cold hard light of truth is turning them into the misshapen formless blobs that we sceptics always thought that they were.

Yep its the perfect pick me up for a conservative on this bright and sunny November morning.

November 19, 2012 6:58 AM / 18 Comments on Yep its the perfect pick me up for a conservative on this bright and sunny November morning.

When I need a laugh there is nothing more Jolly than checking out the “environment” section of the Guardian where you can be sure to fine the latest in environmental Corporal Jones (Vale, Clive Dunn) impersonations:

Now there are a couple of really major and naive assumptions in this rather silly piece not the least of which is the fact that the judiciary does not have the powers imagined by the author in the first place, secondly even if they did getting members of the legal profession to all agree about something is rather like herding cats (strangely quite few lawyers are cat lovers) thirdly the argument is profoundly undemocratic and it denies the people the right to chose their own governments and to have those governments do their bidding. Finally it reveals that inner totalitarian that seems to live within the heart of every Greens supporter. Yep its the perfect pick me up for a conservative on this bright and sunny November morning.
Cheers Comrades]\