Lets thank Campbell Newman for saving us from dreary poetry

As regular readers will have gathered I actaully like the craft of writing,  In this craft, like all forms of creative writing, you learn what works to get your message across and you learn that by having a direct interaction with your readers, rather than having what you write filtered through an editor or a publisher. You see what I am circling around is the issue of “literary awards” and their role in the writing landscape. I have been inclined to think about this because Campbell Newman has just announce that he is scrapping the Queensland Premiers awards with an annual saving to the budget of nearly a quarter of a million bucks. Of course the response to this from the literati has been to denounce this as the act of a philistine: 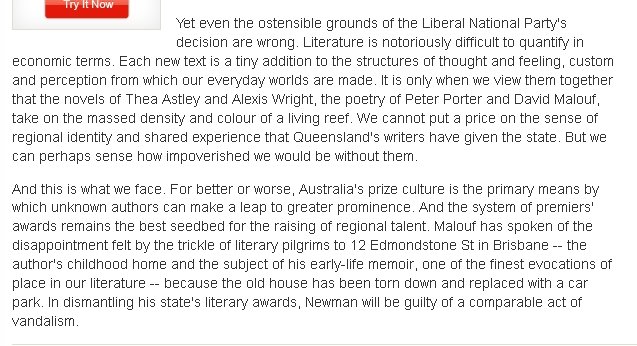 Personally I think that poetry per se is very over rated and that apart from aspiring members of the literati nobody reads poetry at all these days. The exception is of course the poetry of songs and songwriters. I bet that if you ask “Jane Bloggs” on the street to recite a poem from memory you will draw a blank but you ask her to tell you the lyric to a popular song and she will be close to  word perfect.  Of course the cultural elites look down their noses at mere popular music yet that would have to be the only form of poetry that makes any kind of an impression on the people or makes  quid these days. So perhaps we should acknowledge that Campbell Newman is doing we Queenslanders  a favour by scrapping the awards and allowing a rather useless forms of literary expression  slide into the obscurity that it so richly deserves