The latest body blow to Labor’s “clean energy future” should be enough for the voters to see what a huge and pointless folly the whole tax on carbon enterprise is, was and will for ever be. Firstly they had to throw out their floor price and now they have given up on the idea of buying out cola fired generation to “reduce pollution”. Farce is actually too mild a term to describe this symbolic bunch of fools who currently hold the treasury benches in the house. 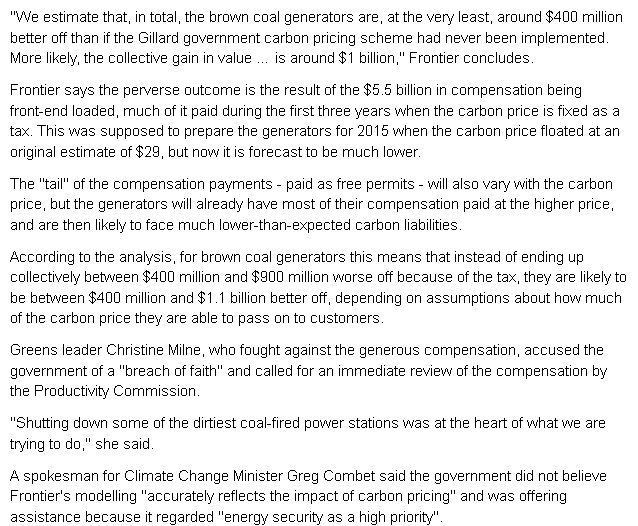 Talk about incompetent! So now Labor will be obliged to take this Ponzi scheme to the next election with it not even appearing to be at all functional as its designers claimed it would be . What a disaster for Labor! Oh I expect that they will produce lots of rhetoric about “evil big Coal” conspiring to wreck the planet but the reality is that its Gillard who is the wrecker here. She and this hopeless Ponzi scheme are wasting government resources at such a rate of knots that it just about beggars belief. All the while we are repeatedly told that the government is short of a quid.  Yesterday thanks to may friend Matt Hayden’s tweet  I read a most illuminating essay in the online version of Quadrant which posited the notion that we are on the tail end of the politics of reform and that essay was mercilessly critical of Gillard’s  Carbon and mining taxes:

We live in an age of bureaucratic capitalism, driven by grants from government boondoggle money-pools like Australia’s $10 billion Clean Energy Finance Corporation. The charms of such state capitalism are irresistible for some but its business models are dismal. In this, as in so much else, the time of the Gillard government in office proved to be a kind of bad Hegelian comedy. The consequence of so many of its policies was the direct inverse of what the government intended. It couldn’t take a trick. As all children understand, that is the essence of clowning. One of the many ways the Gillard government managed to slip on its own banana peel was to promise to turn vast swathes of the seas that are under Australian jurisdiction into marine parks. This was a stunt designed to curry favour at the 2012 Rio talkfest, one of those innumerable, interminable ecological rent-seeking lobby events loved by the frequent-flying global bureaucratic activist class. The stunt presupposed that fishing is not allowed in marine parks. Strike one for marine conservation, then? No. Australia imports 70 per cent of its fish. That percentage will only rise when more fishing is outlawed in restricted zones. The perverse effect of this is that Australia will then simply import additional fish from countries that “strip mine” their own fishing jurisdictions. Strike one for green ideology; strike out for the fish.

As green ideologies have flourished in the past twenty years, self-defeating actions of this kind have multiplied. Green creeds fill the space that socialism and social liberalism once occupied. In their wake they have induced a global industry of professional moralism, pseudo-religion, cod-mysticism, political pandering, bureaucratic pocket-lining, and media pretentiousness. It is impossible to overstate the silliness of the whole show. If you took the dumbest things that management, science, and religion ever said, and spliced them together, you would end up with ecological social “thought”.

So rather than the collapse of communism leading to the end of ideology, instead we got the rise and rise of junk ideologies, especially preening green thinking. Green ideology was an effusive, fatuous kitsch mix of pseudo-science, New Age spirituality and officious morality that aligned perfectly with bureaucratic sloganeering and rent-seeking businesses. Green policy offers a vaguely plausible surround filled with piffle. So it is no surprise that the Gillard government’s carbon dioxide tax was a manifesto of silliness. It was not just wrong or questionable—it was harebrained. Even many of the ministers in Gillard’s government looked embarrassed by it.

In the long history of silly taxes, the tax on carbon dioxide was a world-beater. In 2012 when Australia made its unique contribution to the genial history of comic government lunacy and enacted this tax on a harmless gas, carbon dioxide, it culminated twenty years of the global green lobby insisting that the end of the world was nigh because the planet was warming. The problem with their argument was that the planet was not warming (it hadn’t since 1998) and even if it had been the net global effect of that warming would have been beneficial, and even if warming was a bad thing (which it is not) reducing carbon dioxide emissions by taxing Australia’s emitting industries would have zero effect or (at most) an infinitesimal effect on planetary temperatures. The tax on industries that emit carbon dioxide into the atmosphere will raise at least $24 billion over three years. The tax will drive up industry costs (energy costs in particular) in the order of billions of dollars. Yet it will have no beneficial effect whatsoever. The principal negative effect of the tax will be felt most by low-income groups, the traditional constituency of the Labor Party.

How it is that the least well-off are slugged by a Labor government is easy to explain. Today Labor policies are designed by high-income moralists. This group came to dominate all left-of-centre parties after the ideology of socialism collapsed. The moralising class of affluent tertiary-educated activists, bureaucrats and rent-seekers stitched together post-industrial “values” with welfare economics. Under their watchful eye, regulatory green tape expanded along with entitlement claims. In the global semi-boom years of the 1990s and 2000s, the fictitious wealth of the era made the wonky alliance of industrial and post-industrial statist policies vaguely serviceable. After 2008, the alliance was rendered kaput by economic reality. So then began a new comedy. The Gillard government enacted a mining tax in order to find the money to subsidise low-income families for cost-of-living rises driven by the functionally useless but ideologically imperative carbon dioxide tax.

Its a sobering picture  for we conservatives who have been horrified by the desire of minions of the left to constantly tinker with just about every aspect of society and culture even when the things that they want to change are actually functioning   reasonably well, You could find no better example of this then the so called Gonski “reforms” to education. Its clear to me that what Gillard is seeking to do is to do a “carbon tax” number on Eduction, making huge and far reaching changes that may well have perverse outcomes that make the eduction of our young people qualitatively worse while increasing the size of academia to produce those ” more qualified teachers”, teachers who will have “benefited ”  from the indoctrination from those dinosaur lefties currently in our universities. We need to face the fact that the aspiration that every young person should find a place in tertiary education is madness. All that it does in so many cases is delay the entry of so many young people into grown up society where they can contribute to the future for themselves and the country.

Now there are some rumblings suggesting that Gillard might try to go early to the polls probably with the vain hope that her fine sounding promises on education and disability insurance might shine a favourable light on her administration. Well they might just do that but it won’t be enough to dispel the shadows of her clear failures in just about every other policy that has been introduced by this terribly incompetent government.

James Delingpole promotes Killing the Earth to Save It in Perth

A nice account of James Dellingpole’s book launch in Perth from my good friend Matt Hayden: 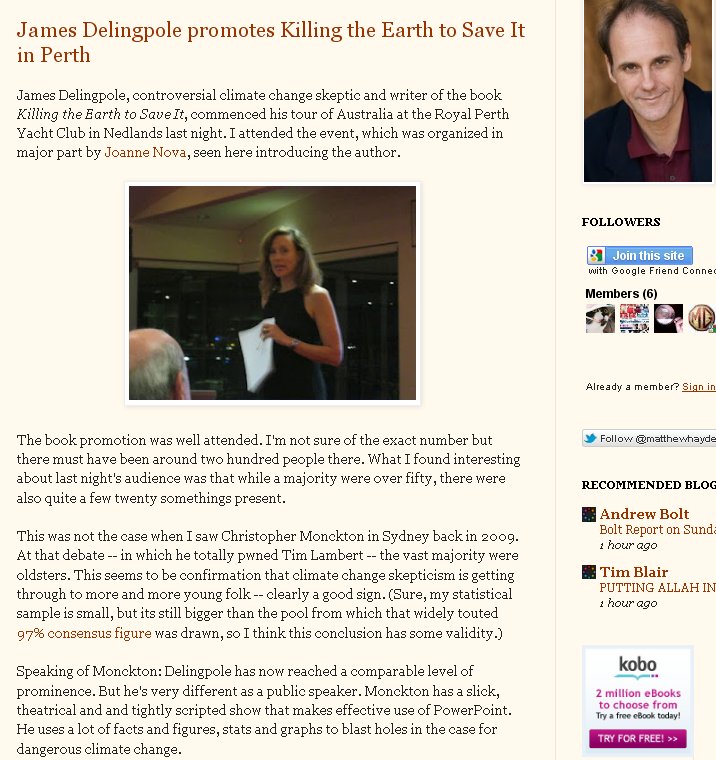 Matt offers some interesting observations about the changing demographics of Climate change sceptics but I can’t help wondering what our favourite decaf soy latte drinker would have thought of the whole thing.