“This is Australia, we speak ENGLISH here”

As a parent there is nothing more useful and informative than your child’s report card  because it lets you know where your offspring are succeeding and more importantly what part of their education needs further effort. As such I welcomed the introduction of NAPLAN testing because its nationally consistent methodology and its easy to comprehend reporting does a good job of telling parents where our children stand in relation to their fellows on the all important skills of literacy and numeracy I also like the fact that this is a test for which there can be no “cramming”. Which is why I found the piece in today’s Age rather strange: 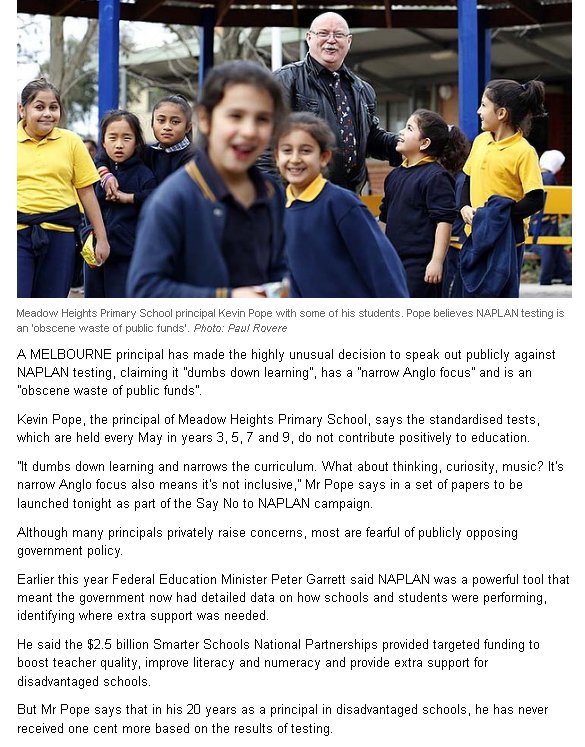 I can’t help but think that Kevin Pope is entirely divorced form the real world and far too hung up with the ideology  of multiculturalism which seeks to accommodate new arrivals from other cultures rather than help them become part of the greater Australian  society. Kevin clearly needs to realise the same simple truth that my late  father in law used to enunciate to his mother when she would speak to him in their native Dutch “This is Australia, we speak ENGLISH here”  because there is no escaping the fact that all new arrivals and for that matter all indigenous people for whom English is a second language, will not find a fruitful life unless they are competent  in English. Language competency is the core business of our schools and If Kevin Pope can’t deliver that or at least give delivering that his best shot then surely he has no business being in the teaching game at all.