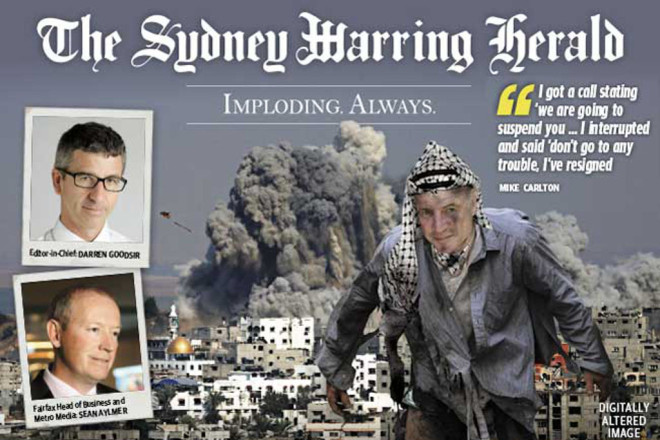 In a letter to the Fairfax chief executive, Greg Hywood, and editor-in-chief, Darren Goodsir, the Australian National Imams Council, Islamic Council of New South Wales and Muslim Legal Network New South Wales, among others, said they would boycott the Sydney Morning Herald unless the outspoken columnist was reinstated.

Carlton quit the Herald on Wednesday after being told he would be suspended for the language he used when replying to readers who objected to an article he wrote discussing the conflict in Gaza. The editor-in-chief of the SMH and Sun-Herald, Darren Goodsir, said Carlton had used “inappropriate and offensive language” – not in the column, but in his responses to readers.

In Saturday’s Sydney Morning Herald, Carlton’s column was replaced by one by author and columnist John Birmingham.

The letter to Fairfax said the Muslim groups would consider notifying community organisations and spokespersons to cease cooperating with Fairfax journalists for media interviews.

“As representatives of the Muslim community we have always regarded Fairfax to be one the more balanced media organisations in the country and where possible we have co-operated with your journalists on countless stories,” it said.

“But with the resignation of Mr Carlton from your publications we have now lost one of the very few voices advocating for the Palestinian cause in the country.”

A media campaign targeting Fairfax advertisers was also being considered, the groups said.

Lets face it Mike Carlton has always been a rather nasty piece of work in the boorish leftard mould and it was his boorishness that has cause Fairfax to give him the opportunity to resign. He forgot the most important thing in public life which is no matter how nasty your interlocutors may be one has to maintain a certain level of decorum and you certainly don’t publicly abuse them on twitter or any other forum.

As for the threat to boycott Fairfax from the   “the Australian National Imams Council, Islamic Council of New South Wales and Muslim Legal Network New South Wales, et al” I can’t help thinking that the only significant thing about these groups is their overly grandiose titles and inflated notions of their own self importance. Honestly who could possibly care if they won’t talk to Fairfax?  I ‘m sure that the Fairfax editors are laughing into their Lattes this morning at such an impotent attempt at blackmail.

As for Carlton anyone want to give me odds that he will soon be embraced by that leader in apologia for Islam, The Guardian, sooner rather than later? After all it is where all of the otherwise washed up hard left Journos all seem to end up.

Now that the ceasefire Gaza is holding please consider

It is also of no small importance that this manual belongs to the Shuja’iya Brigade. The IDF fought a major battle in the neighborhood of Shuja’iya, which had been turned into a terrorist stronghold. The discovery of this manual suggests that the destruction in Shuja’iya was always part of Hamas’ plan.

In a portion entitled “Limiting the Use of Weapons,” the manual explains that:

The soldiers and commanders (of the IDF) must limit their use of weapons and tactics that lead to the harm and unnecessary loss of people and [destruction of] civilian facilities. It is difficult for them to get the most use out of their firearms, especially of supporting fire [e.g. artillery].

Clearly Hamas knows the IDF will limit its use of weapons in order to avoid harming civilians, including refraining from using larger firepower to support for infantry.

The manual goes on to explain that the “presence of civilians are pockets of resistance” that cause three major problems for advancing troops:

Lastly, the manual discusses the benefits for Hamas when civilian homes are destroyed:

The destruction of civilian homes: This increases the hatred of the citizens towards the attackers [the IDF] and increases their gathering [support] around the city defenders (resistance forces[i.e. Hamas]).

It is clear that Hamas actually desires the destruction of homes and civilian infrastructure, knowing it will increase hatred for the IDF and support their fighters.

The truth is often far from pretty Comrades

Pat is clear, lucid and absolutely right here, as I have said many times when faced with an enemy who will not compromise you have two choices, kill them all or surrender, as the latter is not an option then what can you do but try to kill those enemies?

DEDICATED TO Damian Doyle who is so  in love with the “religion of peace”.

Find below a quote from an excellent piece that looks into the current situation in Israel and Gaza.

Western public opinion does not care much for victims, beyond sporadic events such as LiveAid, but it cares very much for victimhood. Victimhood carries with it a cachet, a badge of honour, a sense of aggrievement, a claim for entitlement and a demand for restitution. It’s a powerful and compelling instrument, which is why so many use it. The prizes are endless – emotionally, politically and financially.

Many seek the prizes of victimhood, but not all can realistically assume the condition. So, if you yourself cannot claim victimhood, the next best thing is to adopt someone who does, and claim their cause as your own. For many western progressives, with little cause to claim victimhood for themselves, their adoptive claimants of choice are the Palestinians. They project the desired condition of victimhood on to the Palestinians, and celebrate it in the demonstrations we have recently seen. Fed by media images, the pressure of the crowd and its own self-intoxication, it readily turns to the kind of hatred so obviously manifest.

It’s hard, indeed to believe that these people do not actively enjoy their hatred: that it gives them a rush that nothing else could give them. In this they reflect the crowds of Tehran, Gaza City, Ramallah and Damascus, for whom the only permissible outlet for discontent at whatever cause (tyranny, stagnant economies) is the public celebration of hatred for Israel.

Around the world, millions of people have self-identified with Palestinian victimhood. In a real sense, they (especially the intellectuals) have colonised the Palestinians’ own sufferings in support of objectives they aspire to for themselves. They participate vicariously in the pain of their adoptees, celebrate it and weaponise it to further their own programs and agenda. The names Noam Chomsky, John Pilger, Juan Cole and Robert Fisk come readily to mind as standard-bearers in this process. Half-forgotten political movements – Trotskyites, Spartacists, Anarchists, neo-Nazis – have all picked up the weapon.

Please take the time to read and digest what Rob has to say there You won’t regret it.
cheers Comrades
🙂