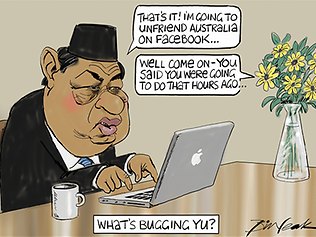 The current crisis, courtesy of The Guardian newspaper and its source Edward Snowden, has brought out of the woodwork all sorts of advice to the new federal government. One of the more bizarre ideas came from former foreign minister Bob Carr. He suggested Julie Bishop should fly to Jakarta and apologise to the Indonesians. I hope she doesn’t. That’s an absurd suggestion. It would undermine once and for all the age-old policy of neither confirm nor deny. And if The Guardian publishes another allegation, does she apologise again? Or if the allegation is serious, but false, how does she start explaining why she won’t apologise? You see the point. The Carr formula is a formula that could unravel our intelligence capabilities. As Opposition Leader, Bill Shorten should dissociate himself from this nonsense. Instead, he seemed yesterday to endorse it.

What is more, neither Bishop nor Tony Abbott was in government at the time of the alleged phone interception. The prime minister was then Kevin Rudd and the foreign and defence ministers were Stephen Smith and John Faulkner, respectively. So if there was any apologising to do, they should do it. For the reasons I’ve mentioned they shouldn’t apologise. They should do nothing.

The Snowden affair is arguably the most serious breach of security in history. It’s certainly a sad indictment of America’s capacity to hang on to its own secrets as well as those of its allies. All this comes so soon after the huge WikiLeaks embarrassment. But it says something about the ideological disposition of the left-wing Guardian that it has shamelessly dribbled out this material to maximise the pain and embarrassment to the Western alliance. That may suit The Guardian but the cost to the national interests of Western countries will be very high. As John Sawers, the head of MI6, told a parliamentary committee last week: “Our adversaries are rubbing their hands with glee, al-Qa’ida is lapping it up.” Perhaps Snowden could now tell us about the intelligence capabilities of his hosts, the Russians.

The anguished cries form the usual suspects insisting that Tony Abbott should “apologise” are about as sensible as they are sincere. Clearly its not really about  our relationship with Indonesia as much as its about seeking vindication for their claims that Tony Abbott is not up to the top job of being our PM.  Once again the current government is being saddled with a mess created on Labor’s watch and the chutzpah of leftist minions chiding Tony Abbott for sticking to the long standing convention about neither confirming or denying anything about intelligence gathering is breathtaking in its opportunistic hypocrisy. Frankly if minions of the left are so keen on an apology to Indonesia then they should be seeking one from Kevin Rudd and or the relevant  former ministers from the class of 2009 when the phone tapping is alleged to have occurred.

As Alexander Downer suggests Tony Abbott should stick to his current position and never “apologise” especially as I am rather inclined to think that Indonesia is more than likely to be attempting to do precisely what it complains about to us. Its much ado about nothing  and as much as it may hurt or beef producers were Indonesia to get up on an even higher horse the reality is that they need and want the “aid” we give them so we have no reason at all to bend the knee to their jumped up and arrogant political class.
Cheers Comrades

George Monbiot, millenarian prophecy and his desire to see western society back into an “energy dark age”

December 8, 2012 8:01 AM / 6 Comments on George Monbiot, millenarian prophecy and his desire to see western society back into an “energy dark age”

One of the reasons that I abandoned the left’s politics is its inability to see the obvious  and its wanton  ability to to be duped by its ideologues. One such issue has to be climate change and the extent to which humanity’s footsteps on the planet will impact on the environment.  One article that I read a few days ago in the Guardian has been republished in the , sorry I meant the AGE,  and its a  call for the subversion of democracy to the to the needs of Gaia from that high  priest of the Green faith George Monbiot:

Of course what all of these minions of the watermelon left ignore is the complete equation, namely the human impact on the environment is a function of not only the things that humans do, but also the number of us that do it. So while the likes of George may whine about the industrial economy they also bemoan the loss of life from pestilence, famine and war. But here in lays the real problem when it comes to human impact on the planet. As a species we have become very adept at circumventing all of the checks upon our population and we are now reaping what this compassion for all has sown. Add to this the persistence of the cultural imperatives to have many children (especially in the third world) and it becomes clear that George is letting his leftist politics and hatred of the “elite” cloud his reason.

There are two ways to control an ever expanding population, either  limit the number of children that are made  to  that which will replace numbers with out increasing our population or we stop making extraordinary efforts  to constrain the four horsemen of death that have for so long controlled human  numbers.  This is of course an anathema to the left who think that every death in a struggle for resources or territory is an unmitigated disaster and requires sackcloth, ashes and the blaming of western culture.  Dare I suggest its not the successful western  cultures that are the problem for the planet because almost all of those have well and truly taken to heart limiting the number of children we make to replacement levels, its the countries of the third world who have unsustainable birth rates which combined with the compassionate “aid”  from the industrialised first world have seen rapid declines in childhood  mortality and subsequent population increases.

If our George really believes his own  apocalyptic doom-saying then why does he not even consider  the issue of population?  It seems to me that he is so in love with his own millenarian prophecy and his desire to see western society  back into a new “energy dark age”  that he is not seeing the real big picture at all .

Peter Gleick (NOT) cleared of forging documents in Heartland expose

To my mind this report in the Guardian is the epitome of bad reporting and that is because the headline is not in fact substantiated by the actual story in any meaningful sense at all.

When you read a headline claiming this:

One would expect a few minor details like who has “cleared” him and on what basis that conclusion was reached.

Sadly all the good comrades at the Guardian offer in the entire piece is the vague sentence that I highlight in my screenshot below: 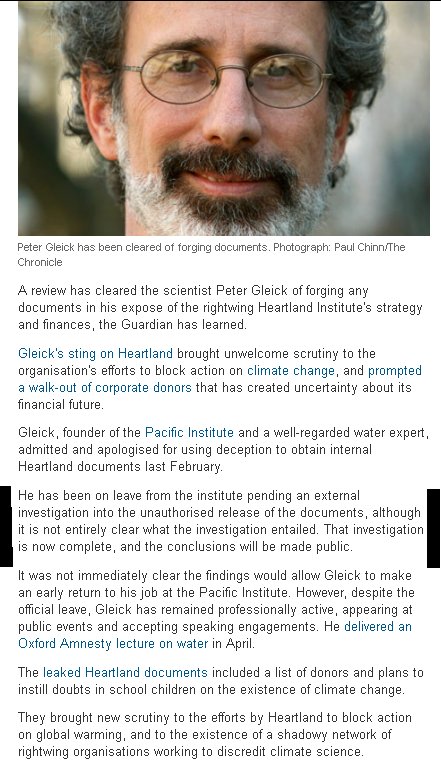 Struth that is as bad as saying his mum is sure that he didn’t do it and then reporting that as fact! Its truly bizzare and clearly ideological that this pudding should be so over egged in the cause of the Green religion, then again the faithful demand that their profits be seen as without sin even when their heartland is black with the pus of lies and deception.