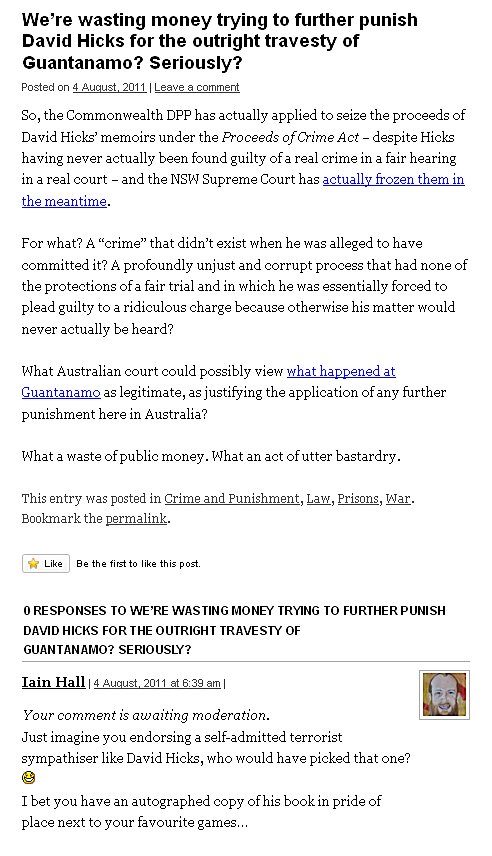 David Hicks may not be able to keep the money from his “Holiday at Club Gitmo” Book, or its about time!!!!

Ah the never ending saga of our favorite Aussie Jihadist; Yep its another story about Hicks, only this time its one which will undoubtedly upset his fan club (Hi PKD 😉  ) because it seem that the Commonwealth is finally going to seize the profits form his self-serving holiday memoir: 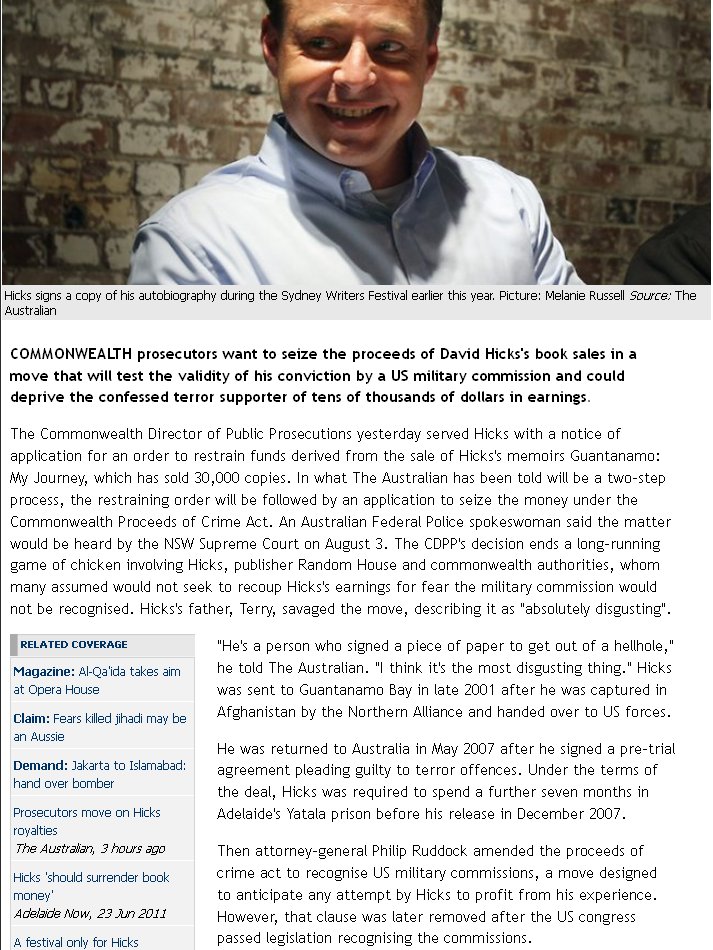 My only question here is why has it taken them so long to act here?

I’m not sure which is more disturbing, the thought of fawning Latte sippers lining up to get David Hicks to sign his book or the notion that he might profit from it. 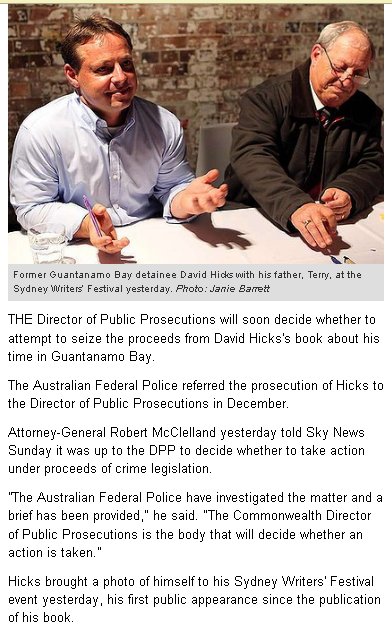 Notice too  how the Age skips over the salient fact that Hicks trained with al Qaeda  and declared allegiance to  Osama Bin laden? Hmm I very much hope that the profits from this book are seized by the Commonwealth, but I am cynical enough to expect that they won’t be because the Labor government and their masters the Greens will ensure that Hicks is able to profit from his crimes, just as they caved in to the spurious law suits from that other terrorist Mandoub Haib.

If Hicks was genuine  about wanting to put those , err,” indiscretions” behind him, then he would just look to the future and not try to profit from a very disgraceful past.

Playing with a marked deck

The reason that most people have a serious disdain for lawyers is that they  charge rather exorbitant fees for what they do but there are times when they themselves can be the victims of some , shall we say “sharp practice” from a client. Hands up anyone who is surprised that the countries second favourite Club Gitmo tourist  Mamdouh Habib is now being sued by his former lawyer for a slice of the money that he has been able to con out of the Australian government.

The correspondence points out that at the time Mr Habib dispensed with Mr Erman’s services, a date had already been set for the mediation session that resulted in the settlement reached on December 17 with representatives of Attorney-General Robert McClelland.

After terminating Mr Erman’s services in the commonwealth case, Mr Habib arranged for another lawyer to accompany him to the session with the Attorney-General’s representatives, where the settlement was reached.

The correspondence on behalf of Mr Erman claims the solicitor has a lien, or legal entitlement, over funds received by Mr Habib in the settlement, the amount of which has been kept secret. The Attorney-General’s office has refused to disclose the amount of the payout and Mr Habib was obliged to sign a secrecy clause, under which he says he can be fined $100,000 if he discloses any of the details.

Truman Hoyle does not specify how much the solicitor claims to be owed and Mr Habib has yet to receive a bill from Mr Erman, who has acted for him in a string of legal cases since his return from Guantanamo Bay in January 2005.

However, a letter from Mr Erman dated December 24 states: “Our estimate is that your total legal fees, for which you will be responsible, should not exceed $2,200,000, including GST.”

On this occasion I actually think that the Lawyer has a case because it sounds to me like the man in the “Club Gitmo” shirt really thought that by jumping out of the cab just before the destination he could avoid paying the fare. Strangely I am not surprised that this man with  no higher purpose but the acquisition of money should act this way. It sorta makes our  Davo look like a much better class of  tourist who deserves some respect for at least avoiding these sorts of shenanigans and getting his life back on track.

If there is a lesson here it is simply this; when you set out to play a hand full of victim cards don’t forget that the dealer at the table will want his cut and woe betide the player who thinks otherwise.

Finally I just couldn’t get this song out of my head while writing this so I’ll share it with the Sandpit:

Club Gitmo is here to stay

I wrote previously that I found it hard to believe that Obama would ever be able to close club Gitmo and in the dying days of this year it is so clear that I am right to have thought so.

“Are they willing to listen to others in the national security arena that have told us and will tell them and have, quite frankly, told the public that Al-Qaeda recruits young people to do harm, to try to blow up airplanes, to blow up themselves and kill others, they use that as a recruiting tool?”

Senator Lindsey Graham, a South Carolina Republican, was in talks that eventually broke off with the White House for a negotiated solution.

Gibbs appeared to acknowledge a draft executive order — previously only mentioned anonymously by officials — to formalise the indefinite detention of some Guantanamo detainees but allow them to challenge their incarceration.

“And some, regrettably, will have to be indefinitely detained.”

Jihadists, you can’t just kill them once you have them in custody and when their  country of origin won’t take them back either just what do you do with em? I think that most of  these men are going to be guests at club Gitmo for the rest of their natural lives….

Should Hicks be allowed to keep the money from his book?

Ok, just a quicky this morning, hands up all of those who think that Hicks should be allowed to keep the money from his book?

In clause 2d of his plea agreement, Hicks agreed to assign to the Australian government any proceeds he may be entitled to, in connection with any publication or dissemination of information relating to the illegal conduct with which he had been charged.

When questioned by the US military commission, Hicks said he understood that the agreement meant he would not “circumvent this assignment to the government of Australia”.

He agreed when it was put to him that if he failed to assign any book profits to the Australian government, it would provide a basis for civil action.

Senator Brandis said the commonwealth Director of Public Prosecutions should be taking legal action against Hicks under the Proceeds of Crime Act.

Personally I think that every cent of any money Hicks  is given by the publishers for his self-serving book should be forfeited to the crown, in the first instance because he is seeking to profit from his vile  past and secondly because he willingly entered into a contractual agreement with the government to do precisely that.
Cheers Comrades

Half a million page views at the Sandpit

I know that statistical miles stones are really meaningless but that does not stop you feeling pretty good when you reach them. Well if you keep an eye on the hit counter at the bottom of the page some time today I expect that you will see the counter tick over t0 the magical “500,000” mark . That is pretty good for a modest blog written as a bit of fun .