Who would have thunk it? 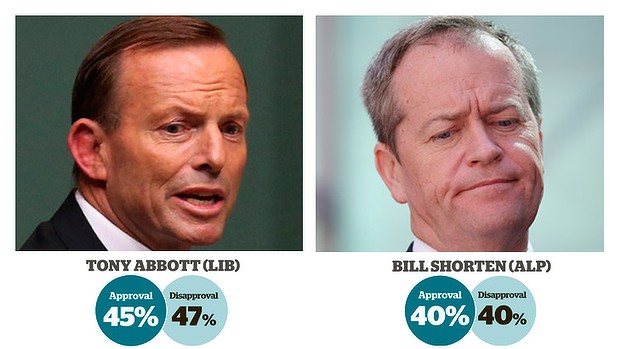 The Abbott government has regained the lead in the latest Fairfax-Nielsen opinion poll for the first time in two months, helped by a sharp drop in support for Bill Shorten’s performance and a Labor primary vote lurching back into the low 30s.
The result has all but restored the balance that saw the Coalition easily elected last September.

There has been something rather sad and desperate about the way that the luvvies were taking great comfort in the short lived downturn in the polling for the coalition but this poll reversal must come as a very bitter blow to those who have been clinging to the vain hope that the Labor party can come back into contention without the reformation that it so dearly needs if it is ever to be credible enough to return to office.

I also think that their parliamentary tactics are backfiring badly. Simply put they are being obstructionist to the government legislative agenda in a rather shallow attempt to demonstrate that they still have parliamentary  teeth. A sensible party would have waved through the repeal of the Carbon and Mining taxes but in an expression of political machismo Electricity Bill Shorten has just succeeded in shooting himself and keeping the very reasons that his party was thrown out front and centre in the minds of the voters.

The utter brilliance of the coalition’s proposed Royal commission into the Unions  can not be underestimated every new revelation of thuggery or other nastiness will stain the reputation of the party that is the creature of the union movement and that means that things can only get worse for the ALP under the current leadership and the truly sad thing is that none of the alternatives are likely to do much better. Shorten had a chance to draw a line under the follies of the last government and move on to rebuilding the party’s fortunes but he chose (or was instructed by his union masters) to carry on in the usual Labor style. Frankly If he is still leader by Christmas I will be very surprised indeed.