I love this truth about ETS from the father of Gaia theory.

My scepticism about AGW is a given and of late I have been arguing against the Warministas on the basis of the sheer impossibility of their prescription for the disease ever being politically possible.

So imagine my surprise to find that James Lovelock saying that ETS schemes are nothing more than a scam designed to make money for the Green spivs?

Your work on atmospheric chlorofluorocarbons led eventually to a global CFC ban that saved us from ozone-layer depletion. Do we have time to do a similar thing with carbon emissions to save ourselves from climate change?

Not a hope in hell. Most of the “green” stuff is verging on a gigantic scam. Carbon trading, with its huge government subsidies, is just what finance and industry wanted. It’s not going to do a damn thing about climate change, but it’ll make a lot of money for a lot of people and postpone the moment of reckoning. I am not against renewable energy, but to spoil all the decent countryside in the UK with wind farms is driving me mad. It’s absolutely unnecessary, and it takes 2500 square kilometres to produce a gigawatt – that’s an awful lot of countryside.

What about work to sequester carbon dioxide?

That is a waste of time. It’s a crazy idea – and dangerous. It would take so long and use so much energy that it will not be done.

There is a message here for the spotty faced and gullible AGW enthusiasts and it is the same one that I have been making for a long time: There is just no point in pursuing a course of action that will be expensive and will ultimately have no effect whatsoever. Now as the message has been enunciated by one of the prophets of The Green faith will you actually listen?
There are none so blind a he who will not see.
Cheers Comrades
😉

Could the emissions trading scheme be Brother Number One's "Workchoices"?

With out any shadow of a doubt it was “workchoices” that did in the previous government, as beloved as it was to the former prime minister a majority of Australians loathed it enough to change their vote to the party of Brother Number One. Well now it seems to me that Brother Number One’s commitment to the AGW carbon trading regime is threatening to be the same sort electoral millstone as “work choices” was for John Howard. As a conservative I just hope that the coalition realises what a political opportunity the mad obsession with this carbon trading nonsense  actually is, the short term pain of a change in their public pronouncements on this topic must be endured because of  the longer term gains  for the party and of course the nation as a whole.

Opposition hardliners want Coalition leader Brendan Nelson to repudiate the present policy that he has reluctantly endorsed and which shadow treasurer Malcolm Turnbull and environment spokesman Greg Hunt have enthusiastically promoted. This says an Australian scheme should start by 2012, regardless of other countries.

Next Wednesday’s Coalition meeting is likely to be a watershed for the Opposition on emissions policy. It is potentially hazardous for Dr Nelson, who will have to choose between being at odds with Mr Turnbull, the leadership pretender, or with many in the Opposition.

Mr Andrews, who gave his opinion to Dr Nelson when they attended Sunday’s Papal Mass, told The Age his view was shared by “a strong body of opinion in the party room. If a move doesn’t come from Brendan, I think it will come from someone else.”

Mr Andrews is a climate change doubter but that wasn’t the point. “Even if you accept the theory, it’s the economic argument I’m concerned about.”

He said it could be “economic suicide” for Australia to start a scheme before others. “I think a majority in the Coalition feels like that … (and) that reflects the general mood of the public.”

“We cannot resolve climate change issues on our own. The large emitting nations must be a major part of any worthwhile global action. I support the establishment of an Australian emissions trading scheme which should progress in concert with the commitments of other emitters,” he said.

I find it most amusing that in the piece from the age that I quote above that the term ‘doubter” is used rather than the more usual and generally pejorative “denailist” when it comes to Kevin Andrews But more importantly I think that even the normally rabid AGW true believing journos of the Fairfax press are seeing that the proposed scheme from Brother Number One is a recipe for economic disaster for this and any other country that buys into this get rich quick scheme for speculators and scumbags.
Brendan Nelson has to have the hardest and most thankless job in the country at present and I think that if he ever wants to get the keys to the lodge the way to do it is to differentiate his party from the Ruddites and this issue is the one to do it, if he has the courage.
Cheers Comrades
8)

A big price for nowt…

Seen as the biggest economic reform in a generation, the proposed “carbon pollution reduction system” unveiled by Climate Change Minister Penny Wong yesterday will hit 1000 firms responsible for 75 per cent of Australian greenhouse gas emissions, with a cost for their carbon pollution. The scheme will flow through to every section of the economy, causing a one-off jump in inflation of about 0.9 per cent at a relatively low initial carbon price of $20 a tonne.

The new impost could drive up electricity bills by 16 per cent and gas bills by 9 per cent.

But the Government will lift pensions to cover the increased costs, with low-income households earning up to $53,000 also to be shielded through direct payments or tax cuts.

Middle-income households will receive an unspecified amount of limited financial help, possibly through a tax cut. 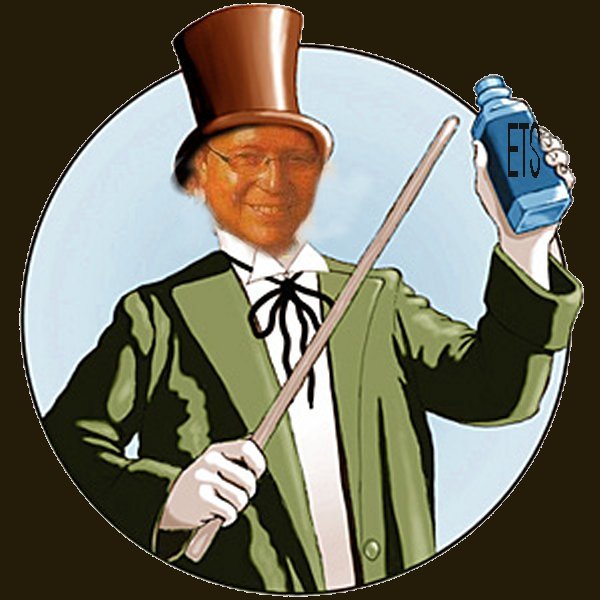 You can’t help being cynical about this emission trading scheme from Brother Number One. Or thinking that in political terms it is a perfect example of the old shell game.  By “compensating” most low income people(largely supporters of Brother Number One) the government hopes to protect its electoral foundations from harm until after the 2010 general election. The partial replacement of the fuel excise with the carbon price is clearly aimed at that. But there is a great way to avoid all of the impact on Australian voters and that is to drop the whole thing. Frankly that is what the opposition should be advocating. They should be saying long and loud that any Australian go it alone ETS is utterly pointless without global co-operation in the absence of any efforts from China  the USA and India. And it is about time that some opposition polles started to resist the stupid claims that CO2 is a “pollutant”, heaven in a hand basket, it is an essential element in all of the biological processes of the planet, without it no plants would grow and no animals (including us) would survive.

Brother Number One , for good or for bad , has hitched his wagon to the climate change caravan and with any luck the people will start to recognise that it is a snake oil show that promises much but that will deliver nowt, with another two years of non warming maybe the Australian people will realise that the way to deal with snake oil sales men is this…