If you are reading this it means that the hit counter for the Sandpit has ticked over the one million hits milestone  which is worthy of note in anyone’s  language, more so in the case of this blog because for most of its existence there has been a sustained campaign to harass and denigrate yours truly and the other authors who post here.

I started blogging on a whim mainly because I needed to register with Blogger to comment on an Anti Andrew Bolt  blog, I have  changed the name and the platform on which this blog is published several times until I settled upon the current title and I am  very happy to n0w share this blog with three other regular contributors who ad greatly to the diversity of  the posts published here. The heart of blogging is not so much the posts themselves but rather it is the comment threads that those posts inspire and over the years we have had some very lively discussion threads that have given their participants lots of fun.

You see fun is what this blog is all about. Even when we have covered the most serious issues I like to think that we can do so with enough levity to keep it friendly.

So in the style of an awards night I have to offer a very sincere thank you, firstly to my fellow authors Ray Dixon (and his alter ego SockPuppet),  GD and to  Leon Bertrand, further I want to thank our readers for coming back on a regular basis to enjoy the musings on this page especially those of you who disagree with what I and the other authors write because without that disagreement we would not have the lively arguments in the comment threads. I also want to thank my wife and family for putting up with this sometimes grumpy blogger on a daily basis and last but not least I want to thank our family dog Bonnie for reminding me on a regular basis that I am only human and that nothing is more important than “walkies “

Cheers to all of our Comrades

I think I must have been about 17 and still living at home when it happened.  We had opened our home to a young man who was what the bleeding hearts would call “troubled” he was about my age, utterly illiterate and eventually we had to ask him to leave for stealing from us, but not in a nice  way and we were rather surprised to find him coming in the back door the next night. I was even more surprised to see my father shouting at him to “Get out of my house NOW!”  even though this young thug was fit, strong and armed with a large  knife, Thug boy retreated the way that he had come in and at that moment I was amazed at the bravery of my father because he has faced down thug boy empty handed and succeeded in keeping his family safe.

As adults we know that if we do the wrong thing that being brought before the beak will have real consequences to our lives but just imagine if we faced nothing of consequence even if we were to, say, rob an elderly couple at knife point do you think that we would have anything but contempt for the police and the courts? Well that is the situation for juvenile offenders here in Queensland, heck even if a Juvenile offender breaches the conditions of their correction orders there are no consequences, it is not even an offence under the current legal system to ignore the directions of the courts.  Thankfully there are moves afoot to reform the way that young offenders are “punished” by the courts and most importantly to get rid of the ridiculous  idea that locking up young offenders should be a “last resort” as the act currently requires. Of course this change won’t mean that first offenders will automatically do the monopoly “Go to jail, do not pass go , do not collect $200” thing but in the age of the internet we can no longer pretend that clued up young crims don’t know the score and don’t know that even if they are caught that they will essentially get off Scott free. that breaching corrections orders is not even a chargeable offence.

Thankfully the Newman government is currently working on reforming the Juvenile justice system to fix these shortcomings in the system as a community we need the law to have meaningful sanctions for those who break it no matter how young they may be because its clear to the wider community that the status-quo is just not working. The intentions of the compassionate and naive to give young offenders the chance to be redeemed is noble but when such chances are endless the sanctions of the courts become utterly impotent. As a society we need the courts to be effective and its very clear that the juvenile justice system here is utterly broken and I really hope that the current review fixes it and if it means that the current generation of young thugs actually do some real porridge then that will be a very good outcome.

“You will read The Sandpit everyday and you will enjoy it no matter what sort of  tosh I publish…..”

This is my 3000th post here at the Sandpit, isn’t it amazing just how quickly this milestone has come around?

I like to think that this  blog functions at many different levels and its contents is as varied as life itself .

Its primary purpose has always been to keep me entertained and to give purpose to my morning cruise through the daily news reports and blog updates , to that end I like to write about the issue de jour that has taken my fancy as I sip on my first brew for the day.  Of course I have also shared some of the events that happen in my own life when I have thought them notable enough  and I have tried to do that with a little bit of wit and my rather wry sense of humour.

So for the next three thousand  posts I hope to continue to provoke and stimulate thought and words from you,  my dear readers, even if those thoughts and words are entirely focused on telling me that I have got it wrong in the most fundamental ways! Sometimes I even get feedback affirming that what I have said is correct, frankly either response pleases me though naturally the later has a somewhat sweeter effect on the palette.

There are times when the death penalty is unquestionably justified, the execution of Mohammad Ajmal Kasab

November 21, 2012 4:03 PM / 6 Comments on There are times when the death penalty is unquestionably justified, the execution of Mohammad Ajmal Kasab

Despite the fact that hanging is to quick and painless for this class of scum-bag  the short lead time between his trial and execution suggests that a capital case need not be as drawn out and expensive as trails tend to be in the United states when a truly evil man is quickly dispatched.
Cheers Comrades

Just how hard it must be to be a “progressive” these days?

According to the touchy feely ideology we should all be tolerant of difference and prepared to endorse diversity. This is fine until you are dealing with the intolerant at which point you have a rather hefty problem:

This of course raises the question of what sort of obligation do we have to tolerate the intolerant?
Its real easy to be touchy feely about those with differing world views when those views are themselves willing to be inclusive and tolerant of your own beliefs but what do you do in the case where the followers of Islam are implacably opposed to something like homosexuality?

Is it any wonder that so many lefties want to ignore the problem and put it into the “too hard” Basket?

Something to consider Comrades

Don’t you just love it when those fine and upstanding fighters against “the system” complain about the major financial  organs of “the system” won’t let the latte sippers use things like credit cards or Pay Pal  to undermine “the system”?  It strikes me that it is a a perfect reason to laugh at the likes of Julian (I did not have non-consensual  sex with those women) Assange whines that his beloved Wikileaks is broke… 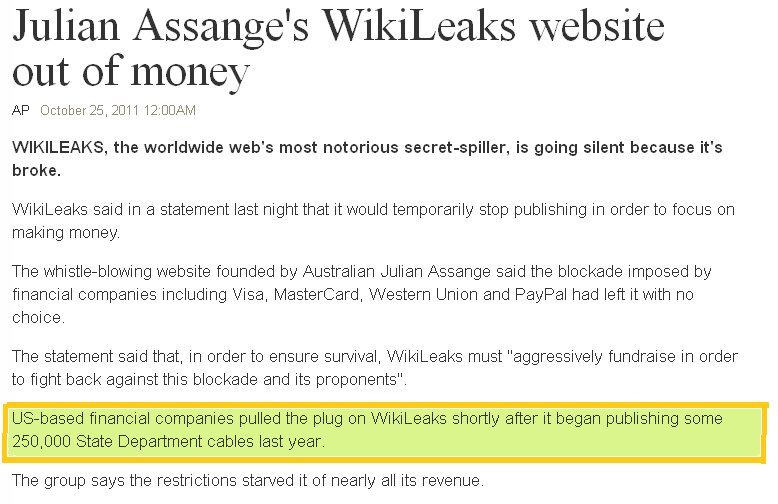 FFS Julian why on earth should the organs of “the system” contribute to its own downfall by supporting your personal vanity project? Its rather like asking a condemned man in Texas to fill the syringes for his own execution. So if you can’t get the far left faithful to give you actual money, or traceable cheques there is only one thing to say and that is tough mate!

I can’t say that I’m at all sad that Muammar Gaddafi is now confirmed dead but I am rather less than optimistic that the rabble who have ousted him will prove to be better. Of course I hope that they will be better but I would love it if anyone can give me a reason to have faith in that hope.
Cheers Comrades

How to commit murder

At the risk of being totally not politically correct I offer this little Bon Bon,

I never thought  that minions of the left would be such a humourless and sanctimonious lot, even though I tagged this post to show that expectation but right on Cue we have our erstwhile critic Zane Trow sprouting off (under an assumed name) in the comment thread over on the dark-side:

Today Hall has a fake axe murder video on his site. The last few days in Brisbane we have seen the saddest and worst example of an axe murder for many many years. Hall wallows in this, he is the most vile excuse for a human I have ever come across. It is simply disgusting, it actual makes me want to vomit. I pity his children and his whole family, and actually I fear for their safety.

I am ashamed to have ever engaged with him at his site. I feel dirty just thinking about it.

OK, I admit to having a rather dark sense of humour

I was  entirely ignorant of the crime to which Zane refers to  here, if such things don’t make it to the Radio National news reports they go straight past me to be honest, doing a little research does suggest that he is referring to the murder of a teenage girl by her mother who subsequently jumped off the Storey Bridge Now as horrible as that murder suicide appears to be Trow is drawing a very long bow to make the ridiculous claims that he does about me in his comment above. Sadly there are vile murders committed every minute  of every day somewhere on the globe among the billions of our number. So according to Trow’s twisted logic every author of every blog should be aware of every murder and therefore not make light of any of it with a bit of dark sarcasm.

For a man with such a devotion to the transgressive in the production of “Art” he seems rather intolerant to me tickling the boundaries of  good taste here and I can’t help but wonder if he feels the same about the animal rights protesters in this story, after all at least one of them has some resemblance to the murdered girl… Do you fear for their families as well Zane