Dreaming of a new online normal

In the seven years that I have been playing the blogging game I have seen some big changes, well the fact that broadband has become the ubiquitous norm rather than the exception has been a biggie. Now we bloggers can put up a far more attractive page with graphics and many photos without concern that it will be too slow to load or despised by readers because it uses too much of their download allowance. I have seen the rise of twitter and the migration to that platform of many of the snark artists that used to haunt the bloggosphere. This has also seen the decline in a vast number of blogs which existed only to accommodate the eternally mean and vicious, well good riddance to bad rubbish, such loses are not mourned in this part of cyber space. Now we are finally beginning to see an end to the online free for all that is just so beloved of the trolls and scum bags. The law is beginning to hold online miscreants responsible for what they say and do which is a trend that I am pretty certain will continue and which will help to create a new normal where one will have to be as decent online as we are expected to be in the real world. 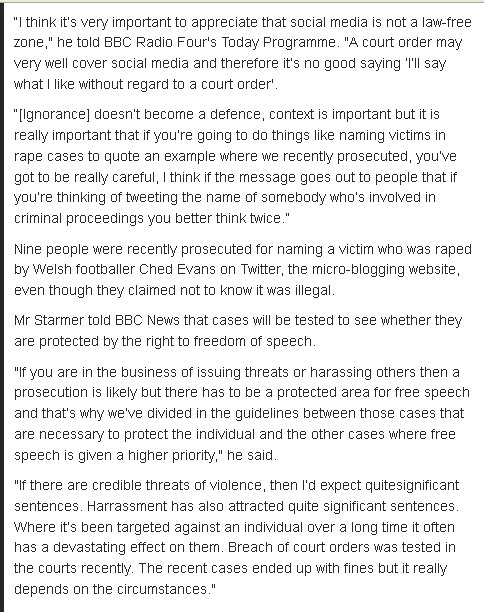 It may well take a while for the lawmakers to fully address these sorts of issues, heck it may even take the suicide of a few more victims of cyber-bullies (although I hope not) but there is no doubt in my mind that the tide has turned against a totally unregulated online environment and we can only hope that the right balance can be struck between adequate disincentives for despicable behaviour and the maintenance of our rights to free expression online.
Cheers Comrades

I hope that readers can forgive me returning to a pet topic of mine but I found this piece about Lord Justice Leveson’s address rather interesting and I am pleased to note that he is saying things about the “new media” that Both Ray and I have been arguing for quite sometime, namely that its users have to be held responsible for the things that they write or  say.

In the super-injunction example, the writ of the law was, perhaps, believed not to run against bloggers and tweeters. This is perhaps an example of the wider phenomenon I mentioned earlier: the belief that the law does not, and cannot apply to the internet. In many ways this is a pernicious and false belief: false because the law can be enforced against those who blog and tweet; pernicious because the idea that the law does not apply to some while it applies to others undermines the rule of law as it is inconsistent with the idea of equality before the law. Procedural justice requires the law to be equally applicable to all.

While Lord Justice Leveson speaks  to the nature of the problem with the “New Media” he does not offer any idea about how individuals may be held responsible for the things that they may publish in a tweet or blog and while he does not go further than mentioning online anonymity in passing  I am saddened that he has not made the logical connection between easy anonymity and the behaviour that it enables and encourages.  personally I think that easy anonymity goes hand in glove with bad behaviour and that Ray’s suggestion that no social media presence without verifiable bona fides should be possible has merit for improving accountability and  civil behaviour. The suing of Twits and Bloggers who have thought that they could ignore the law with impunity is something that we will see far more often in the coming years and we Bloggers will have to be eternally aware of just where the boundaries of the law are if we are to avoid litigation. Personally I have always strived to remain within the bounds of the law because I do understand that doing so is essential for the civility of  social engagement, hopefully those who have thought other wise will be brought to heal by the evolution of the law in the way that it pertains to our ever  increasing online presence.

Grog’s Greg outed … so what?

The Internet is all a buzz over The Oz newspaper’s outing of political blogger Grog’s Gamut as one Greg Jericho, a public servant.

None more so than those keepers of ‘intellectual honesty’ from Crikey’s Pure Petulance where boring little Tubby Zigler (an anonymous author himself) has got his university academic balls all in a knot and is truly outraged:

The Australian has deemed his identity to be news, and they also seem to have decided that public servants aren’t entitled to hold political opinions. I’d suggest they’re wrong on both counts….

Yes that’s Tubby being “outraged” – belting the Oz with a limp lettuce leaf.

But what’s he on about? Grog’s blog was certainly news when his critical post about journalists was picked up by most of the media during the election campaign – making major headlines – so why wouldn’t his identity also be news?

Of course it is.

And even Tubby agrees that no one has a “right” to anonymity on the net:

… pseudonymous bloggers who are publishing only their opinions and analysis aren’t the same as sources and whistleblowers. Do they deserve the active protection of their identity? No.

Tubby is one confused little puppy. First he crys “foul”, then he says bloggers can’t remain anonymous. Go figure. Maybe he’s just worried about his own identity? He shouldn’t be -only significant bloggers get named.

This Grog’s stuff is really just a storm in a beer glass. What harm has it done?

And what the hell is Tubby’s point?

The Oz might be trying to make it look like Jericho has broken his obligations as a public servant but, from what I can see, he’s got nothing to worry about. Naming Grog might be malicious and vindictive but it should also be entirely expected. And does it really matter?

If Jericho feels he needs to close his blog because his cover is blown then that’s his decision. He made his own bed so …

Besides, he can always start a new blog under a different alias. He probably will.

Greg Jericho has done nothing wrong in my opinion but he really can’t complain that someone went after him. No one made him enter the world of politics and the media did they? That was his choice.

Welcome to the real world Grog – the virtual world is a myth after all. It doesn’t exist. But good on Jericho for keeping his nose clean and staying out of the gutter. He certainly earns respect.

I mean, it’s not like he used his anonymity to stalk anyone. Or harass them. Or defame them.

It’s not like he’s been involved in hacking someone’s computer either.

And it’s not like he has hounded some people over the Internet for years on end and, in so doing, might have broken the law.

Now those people really would be worried about being outed.