@ShutUpIain shuts up shop, or another cowardly scumbag caught out

There are days when you just have too look out of your window and be thankful for the sunshine , well to day is such a day because I have just managed to get a stalker off my back. This creep set up a twitter with the lovely Tittle of @ShutUpIain  This scumbag has been harassing me with this little stalking horse since March.

Yes Comrades it was just another example of  how certain people think that being anonymous on the net gives them License  to stalk and harass  people.  Now were I to be a vengeful man I might, at this point be tempted to name this creep, which could well ruin his life, destroy his small business and frankly bring utter havoc into his life, Believe me the temptation to do so is really  really strong because this is not the first time I have had to deal with his creepy obsession with me. I have actually banned him form commenting here under three or four different pseudonyms but he just keeps coming back to try it on again and again.

Well I won’t beat around the bush @ShutUpIain  next time you try this sort of crap on I won’t hold back , I won’t think twice about how making you own your bile I won’t care if my revelations might hurt your family, I will name you very publicly and I will make a complaint to the appropriate authorities about you stalking me, your nasty online behavior will come back to haunt you and you will think that your life has become a Stephen King Novel without a happy ending.

Am I making myself absolutely clear @ShutUpIain?  Just go away and live your life in peace without ever trying to comment at my blog, or attacking  me elsewhere. Frankly you should just go away from anywhere on the net that I frequent and just pray that I never find you harassing me again because there will be no more chances, no more compassion for you and you tiny insignificant life so think twice and then think twice again before you try to harass me because you WILL regret it.

That is a promise!

I truly hope that I never have to write this sort of post again I am just so sick of all of the old blog war stuff which is in internet terms very ancient history indeed sometimes a man  has just got to make the journey and fight the good fight even when they don’t really want to.

Well that is another one….

As I have been recently suggesting the nature of the online environment is changing and one of those big changes is the decline in the acceptability of one having a truly anonymous presence online. With this in mind I was quite pleased to find another example of this trend with the social media app “4square” moving to require real names: 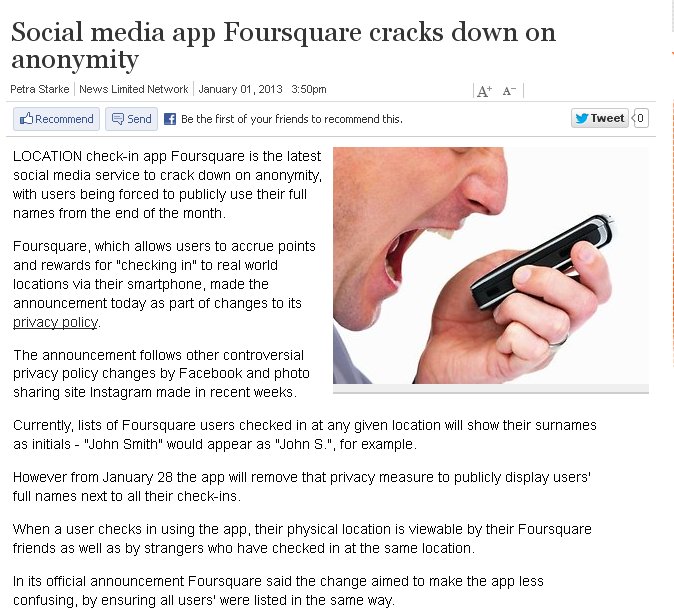 Personally I find this entirely unsurprising and I tend to think that before too long people using pseudonyms on the net may be about as acceptable as failing to remove a motorcycle helmet when you go into a bank branch.

Well Fairfax without Jo Chandler? who would have thunk it?

Well that will mean that my ‘favourite” senior writer will have more time more time to write sycophantic books about climate scientists and tomes about disgraced female police commissioners that no one will buy. It will also give her more time to hang out on twitter…
Pardon me while I indulge in a bit of schadenfreude here for reasons that I am unable to share publicly but this news does make me rather happy and for that I offer thanks to Peter Wellard who is but the latest of a very long line of would be internet vigilantes who obsessively follow everything that I write on line. Which must make me a celebrity 🙄

Jamie McIntyre wins against Google or making the net nicer

Well it seems that I’m still on the issue of internet anonymity and I am very happy to report that Google have lost the right to shield users of their service from the legitimate inquiry about who they are when they have been behaving like scumbags by anonymously creating a hate site that defames  Jamie McIntyre. Now as regular readers will know Ray and I have been subject to the same sort of nonsense from anonymous malcontents and internet vigilantes. It will therefore surprise no one when I cheer this decision by the supreme court:

Its taken a long time but its seems to me that the law is finally beginning to catch up with the realities of the internet, now if only the cost of seeking redress were to be reduced to a point where you don’t have to be as well off as Jamie McIntyre to bring anonymous attackers to justice then the net will become a far better place.

A year is good but more would be better

I must say that I am delighted to report that some of the most offensive behaviour on the internet has resulted in a conviction and more importantly jail time for the miscreant responsible:

The Brisbane District Court was told Bradley Paul Hampson, 29, posted offensive messages and photographs on Facebook “RIP tribute” pages for a 12-year-old boy stabbed at a Brisbane school and a nine-year-old Bundaberg girl abducted and murdered in February last year.

Hampson, of Tarragindi, on Brisbane’s southside, on Friday pleaded guilty to two counts using a carriage service, the internet, to cause offence and one each of distributing and possessing child exploitation material — meaning child pornography — between February 14 and June 4 last year.

Prosecutor’s said Hampson “posted” photographs of one victim with a penis drawn near their mouth and highly offensive messages, including “Woot I’m Dead”, “Had It Coming” and others too offensive to publish.

Isn’t it good to see that the courts are taking very seriously the more disgusting behaviour form the fringe dwellers on the internet? Speaking as someone who has had to put up with some similar treatment and vilification through obscenity posted on the net it is most heartening to see people like this enjoying a stretch in one of her Majesty’s fine hotels for at least  the next year. Sadly from the looks of this photo the scrote has not learned any humility of felt any shame for his crimes. Then again  my experience with his ilk suggests that they are incapable of understanding even the most simple ethical concepts, have no moral centre and they deserve everything that they get.

The futility of blackmail, and the stupidity of some who try it

I like watching all kinds of crime  drama in film or on DVD’s and one of the mainstays of the genre is the  blackmail plot. Usually they concern the extraction of cash or another valued commodity  from someone who  has something to hide. The dramatic frisson usually comes form the competing imperatives of the victim of the attempted  coercion and of course the fact that if the victim pays up there is never any guarantee that there will not be escalating  demands for a further stipend. The lesson is  that if you give in once then they own you body and soul forever.

Understanding just how it works

Of course the revelations being threatened actually have to be something that the victim fears being made public, after all only a truly stupid blackmailer would try to leverage something that is already out there in the public domain. However there are a some  truly stupid criminals out there who may  try such blackmail. The target of this sort ineptitude would of course just laugh at any blackmailer who seriously thought that they have enough leverage to elicit anything from their victim. Imagine  if   the “revelations” had already been published on the internet but the closing of an odious website meant that it was not as easily accessible as it once was, Google’s cache and the likes of the “wayback machine” mean that nothing ever truly disappears from the internet, only a truly moronic blackmailer would think that threatening to republish what is already in Google’s cache is any real threat at all.

A possible  resolution of this sort of  blackmail plot-line  is of course the undoing of the evil merchants of coercion, where they find that rather than    their victim  just of ignoring them, as he has for quite some time, he may decide to make their vicious stupidity more widely known. They should of course just shut up shop and walk away with the certain  hope that the subject of their attempted coercion would not be a vengeful man and  after a period where he is not harassed or derided by them, will decide that the evidence of their mendacity,  stupidity and repeated deceptions  is probably   better kept private.

Then again perhaps such idiots don’t even understand that what they are attempting is actually blackmail and they need do some fundamental research of the definition of that crime, for example here on Wikipedia

Half a million page views at the Sandpit

I know that statistical miles stones are really meaningless but that does not stop you feeling pretty good when you reach them. Well if you keep an eye on the hit counter at the bottom of the page some time today I expect that you will see the counter tick over t0 the magical “500,000” mark . That is pretty good for a modest blog written as a bit of fun .

Top gear is on now and I don’t have time to respond in detail but to those scum bags stalking Socky I just can’t help laughing, that they have so little to back up their second attempt to out him.

“Police academy” is what comes to mind bumbling fools!

This post will be updated in the morning
Cheers Comrades!
😆

Proof that that SockPuppet is not Ray Dixon