“I am Charlie Hebdo”

Two gunmen in balaclavas and bullet-proof vests, armed with a pump-action shotgun and an automatic rifle, stormed into the Paris offices of Charlie Hebdo at about 11.30am as about 15 journalists had gathered for the weekly editorial conference. They called for the editor by name and then murdered him before spraying the room with gunfire, killing nine more and wounding others. Laurent Léger, a Charlie Hebdo writer, managed to sound the alarm, calling a friend and telling him: “Call the police. It’s carnage, a bloodbath. Everyone is dead.”

As they made their getaway, the gunmen shot dead two policemen, including one who they shot in the head at close range as he lay injured on the pavement.

The two attackers then jumped into a small black Citroën that they had apparently arrived in and drove off. Police said there was a third man involved in the attack, who had driven the car to the magazine offices, on rue Nicolas Appert in the 11th arrondissement in eastern Paris, and it is not clear whether he fled the scene during the attack.

The gunmen abandoned the Citroën in the 19th arrondissement, in the north-east of the capital before hijacking another car. Police said the attackers had then had gone to ground, leaving a nation in shock.

The attack was the bloody culmination of a long-simmering struggle between France’s libertarian traditions of free speech and an increasingly extreme strand of Islamism. Witnesses described hearing the attackers shout “Allahu Akbar” as well as “We have avenged the Prophet.” Two eyewitnesses said they claimed to be from al-Qaida. One of them specified al-Qaida in Yemen, a group also known as al-Qaida in the Arabian Peninsula.

The French are often despised by the English for being “cheese eating surrender monkeys” as a consequence of their capitulation to the invading Nazis during the second world war so It is heartening to see that they are on this occasion not being at all meek in their response to this outrage. To be frank there is no reason to make excuses for Islam after this assault upon every writer’s freedom of speech. Yet I am certain that there will be elements of the left who will do just that. Without the right to treat the totalitarian religion of our age with the utter contempt that it so clearly deserves we are all slaves to its propagators and as someone observed on twitter “It is better to die on your feet than to live on your knees” (who said that before?) maybe its time for all of the fourth estate to stop pussy footing around with the followers of Islam, to tell them that they are not going to win and that theirs is a religion that is totally unacceptable in a modern world. maybe its time for all of us who have a presence in the public media discourse to stand up and say “I am Charlie Hebdo” just as the slaves in revolt against Rome all stood up and said “I am Spartacus”* 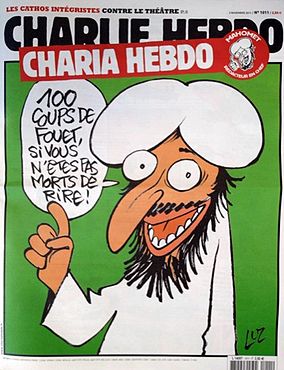 *well according to the film anyway

By Iain Hall in God bothering, Islam, Islamist Terror threats, Journalism, Leftism, Media Matters, Political Correctness, social networking sites on January 8, 2015.
← Gearboxes and Pizza boxes that do not face Mecca Nothing to be Islam, or the power of sarcasm →