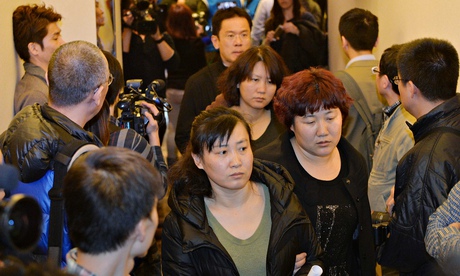 Relatives of passengers on the missing Malaysia Airlines flight MH370 arrive for a meeting with airline officials in Beijing. Photograph: Mark Ralston/AFP/Getty Images

Now as the search for Malaysia Airlines flight MH370 continues we have the revelation that at least two travellers on that flight were flying on stolen identities. Now while the report from the Guardian is very quick to down play the the possibility that the plane was deliberately brought down by an act of terrorism. personally I think that at this point in time its a better  than evens chance that the loss of the aircraft is the result of an act of Jihad.

The Malaysia Airlines flight missing with 239 on board may have turned around just before it vanished from radar screens, the country’s air force chief said on Sunday as the government said it had contacted counter-terrorism agencies around the world following concerns over unidentified passengers.

Transport and defence minister Hishamuddin Hussein said officials were considering all possible explanations for the disappearance of flight MH370, adding: “We cannot jump the gun. Our focus now is to find the plane.”

The airline warned families to prepare for the worst as the search widened amid inconclusive reports that debris had been spotted floating in the sea between Vietnam and Malaysia.

At least two people on the plane were travelling together on stolen passports, fuelling concerns about the Boeing-777’s abrupt disappearance in the early hours of Saturday. However, experts said there were many possible reasons for why it vanished and for people to travel on false documents.

Malaysian officials said they were looking at four suspect identities and were examining the entire passenger manifest. Interpol confirmed that at least two passports were listed in its database as stolen and that it was examining other documents.

The international police agency’s secretary general, Ronald Noble, said it had spent years urging countries to screen all passports systematically. “Now, we have a real case where the world is speculating whether the stolen passport holders were terrorists, while Interpol is asking why only a handful of countries worldwide are taking care to make sure that persons possessing stolen passports are not boarding international flights,” he said.

The fact that Malaysia is an Islamic country may well have made its national carrier think that it would be very low on the possible targets list but with the very acrimonious schisms within  Islam I don’t think that we canmake assumptions  like that, besides which the next world superiority over this may have made the possible death of Muslims logistically acceptable.

Secondly despite my utter aversion to flying I do appreciate that modern planes do not just suddenly disappear off radar screens without some sort of communication to ground informing the air  controllers that they have a problem. The there and then gone aspect of this disappearance suggest at the very least   a sudden  catastrophic failure of the aircraft. With a sudden disappearance AND two  passengers using stolen documents to travel on the plane its not looking good for those who want to make excuses for the religion of peace.

Coincidentally My lovely wife organised for us to go on a date to the movies yesterday and the film she picked was , of all things “Non Stop”  which is a film about terrorists on an airliner. Not a bad flick really with lots of twists and turns to the plot, every possible passenger stereotype from the virtuous Muslim doctor, a  to the scared unaccompanied little girl, an off duty NYPD cop, a plucky stewardess. There was echoes of 911 in the reactions of the passengers and at the end a good exploitation of brinkmanship and, as you would expect from an American film an uplifting resolution of the plot. I could not help thinking about MH370 though and that happy endings are easier to find in the reel world. No matter what the reasons for this tragic loss may prove to be, the families and friends of the compliment of MH370 are going to be grief stricken. I for one hope that the cause is found sooner rather than later but I expect with the crash site as yet undiscovered its going to be a rather long wait for answers.

Things are no longer so simple