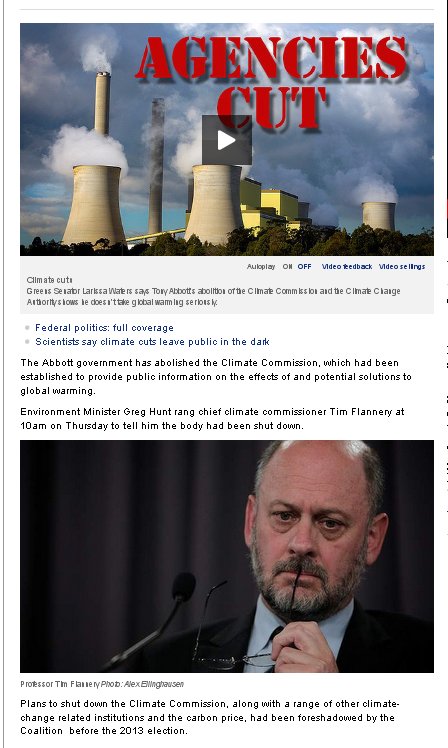 In a statement Mr Hunt confirmed that he had dissolved the commission.
“As part of the Coalition’s plans to streamline government processes and avoid duplication of services, the commission’s function to provide independent advice and analysis on climate change will be continued by the Department of the Environment,” he said.
“I would like to recognise the efforts of the Climate Commission in providing information on climate change to the Australian public and thank all the commissioners for their work.
“This decision will save the budget $580,000 in 2013-14 and an annual funding of up to $1.6 million in future years.”
A spokeswoman for Mr Hunt said he had also approved a brief to begin drafting a bill to repeal the separate Climate Change Authority as part of the Coalition’s broader efforts to remove the carbon price.
>click for source

If ever you wanted to define a partisan quango the climate commission would be the perfect exemplar populated only by the most devout followers of the apocalyptic green faith it has not once told us anything of value that was not already widely circulated in the media. when it comes to feather bedding this is one of the worst examples you can conceive of. That is the thing though that the Luvvies who read the Age et al do not seem able to get their heads around, because even if you believe in anthropomorphic climate change you can still applaud this saving of money spent on an organisation that does absolutely NOTHING to solve the problem (assuming that the problem is real).

While it is fair enough to feel some empathy for the followers of the faith (like our sometimes commentator Damian Doyle AKA “toaf”) who will now be searching for alternative employment  its hard for me not to think that maybe if they had been doing something more socially useful in the first place then they would not now be putting Centerlink on their speed dial list.

By Iain Hall in AGW and climate change, AGW true believers, Australian Politics, Global Warming, Green Hypocrites on September 20, 2013.
← “Abundance of Evidence” Against Craig Thomson How many blood soaked shopping trolleys will it take before the penny will drop on the obvious? →