This story tickled my fancy this morning because it has a great deal to say about the silliness of European governments and it suggests a new and environmentally friendly way to promote euthanasia tourism.

Really could anyone think of a cleaner or greener way to end the suffering of the terminally ill? All that has to be done is to throw them off the same cliff, a thousand foot drop will be enough to end their lives very quickly and disposal of the mortal remains will be assured as well as being a great way of helping the survival of an endangered species… Its a win win win idea whose time has surely come.

Levity aside though this story does highlight the  unintended consequences of  government decisions because if the long traditional practice of disposing of dead live stock  by leaving them for the vultures has made what was a benefit to the farmers a liability  which is itself symbolic of the way that the whole European experiment is failing because while the European union may have heralded an era of unprecedented peace it has replaced the cycle of war with the false hope of unity and the petty minded stupidity of an unloved bureaucratic hierarchy. 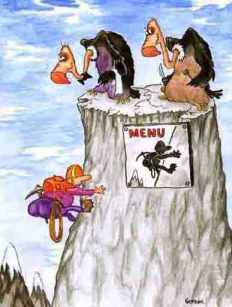