Chemotherapy and the Easter bunny 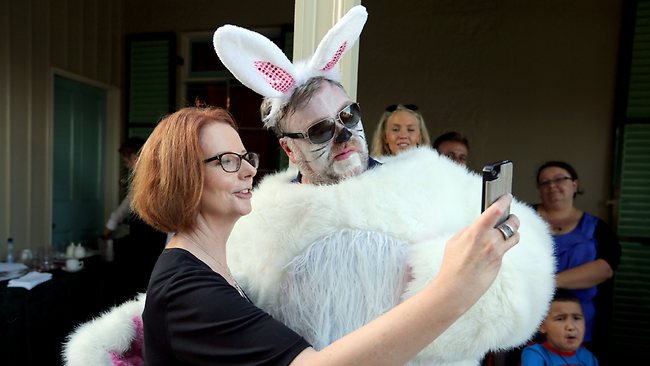 I am eternally thankful that my fellow  Sandpit authors have given us their perspectives on the  failed coup and its aftermath because I  have been at both horrified and rather to bemused to write anything substantive about the whole sorry mess and I have been trying to avoid letting my personal feelings of Schadenfreude cloud my judgement over the implosion of the Labor party. Its just too delicious when a bad government turns upon itself  and is so obviously committing a very public act of political suicide.  Now for a government that claims  not to to be in campaign mode the stunts and pork barrelling  are starting to c0me  thick and fast. With Gillard promising millions for schools up here in sunny Queensland  and we will see an unending litany of similar promises where ever the blighted one appears to spruik  her political potions.  The new cabinet announcement will be an interesting thing to watch and I expect that those elevated to, a hem, greatness will all struggle to hold their seats as a consequence of drinking deep from Gillard’s Koolaid  but I suppose that they can take some comfort from the beneficial effect that their brief elevation to the ministry will have on their superannuation when they join the ranks of the unemployed after September 14. When you are living in gloomy times there is no doubt that you will enjoy even the most fleeting moments of sunshine even when omens foretell  that eternal darkness is but a few short weeks away. 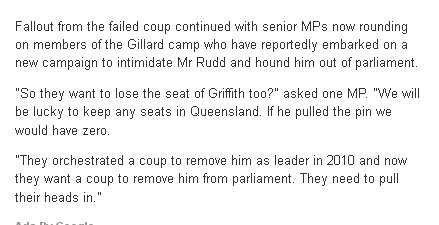 With that in mind I am of course not at all surprised that there are moves a foot to encourage Brother Number One to totally leave to political stage and either quit or lose his seat in the house. Personally I can understand the reason that the Gillard Glee Club would want all trace of the once and future leader erased from the timeline but I also expect that a man of  Rudd’s ego will not go quietly under any circumstance.  One who appears to being coerced to stay though is the leader of government business in the house Anthony Albanese  who is just too valuable to the Gillard  crew to be allowed to fall on his sword in the same way that fellow Ruddites have done over the last few days. Its a measure of the lack of moral turpitude in the Labor party that even in total victory of the the forces of the Rudd push that Gillard has to hold on to Albanese like grim death because they have no one in their camp who can do what he does in the house.  Yet another example of the way that this government is driven by only one thing and that is to preserve the current power and status of its  leader and to pretend that the future  of the party does not matter in the least.

The Easter festival  has always been about renewal even before it was assimilated into Christian mythology and I can appreciate the value of such a festival in the cycle of the seasons but for Labor I see it as being about death without the possibility of resurrection, of a tomb that will not be empty on the third day and that the sightings of  a risen saviour will all be the desperate delusions  of the faithful who have all but lost their religion and who chant the litany even though their hearts are not in it any more. Take heart though Comrades because there is hope that what will die in September will be the the worst aspects of the the once admirable Labor party and that which  will be resurrected and nurtured in the wilderness  of opposition will be  a party that is relevant to today and the changing face of the Australian electorate rather than a slave to the unions and their outdated socialism and class warfare mantras. Then again such political cancers are incredibly hard to kill so I won’t be holding my breath waiting for the electoral Chemotherapy to work.

By Iain Hall in Australian Politics, Federal Election, Federal politics on March 25, 2013.
← Useful Idiots Labor dumped by voters in the wake of the failed coup →