If there is one certainty in this country  it is the simple fact that The Fairfax press will always give any Labor  government the benefit of the doubt for  far longer than it will do for any Coalition administration. Its just what we expect from them because most of their journos are sympathetic to leftist thinking  and ideology. Thus when you have a lead story suggesting that Gillard resign from the Prime Minister position then things must be really crook with the government: 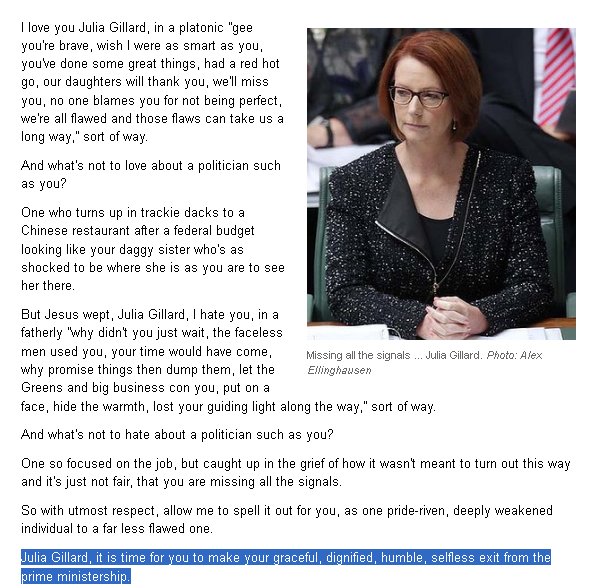 Some how though I doubt that Gillard will go with any dignity, that she is capable of making the ultimate sacrifice for the sake of the party. She is just arrogant enough to think that her losing face by resigning would be less preferable than leading the party into the blazing guns of a well disciplined opposition who are not in the mood for showing any mercy to a government as bad and incompetent as her administration.

One can only think that Gillard is imagining  this poem,

and imagining that she will be redeemed in a  political afterlife  as one of the glorious dead who went down fighting. We are not however any longer in the age of Alfred, Lord Tennyson where we glory in the noble but stupid and pointless sacrifice. We are in an age of pragmatic politics where we expect that the sacrifice for the greater good should be as bloodless as possible. Of course I agree with Fairfax press insofar s they are suggesting that Gillard has used up all of her electoral good will frankly it no longer matters how she tries to present her self, no matter what sort contortions she tries  hers is a lost cause  and she can only drag the entire party  down further with each extra day she stays in the lodge.

Ray must be just as despairing as all of the all the other  ALP tragics  at this point in time because even Kevin “I’m here to help” Rudd  will lack the power to  retain office at the election. You see I used to think that Rudd “could save the furniture” but now I’m not so sure,  because the party brand has been so tainted by the Gillard crew that even many of their “true believers” will either vote for Abbott or, as I think more likely, just abstain by making an informal vote on September.

Of course the coffin makers union are delighted at the prospects of such a large surge in business  from the  Labor light brigade  but they are , like so many unions, being short sighted and self focused because for the sake of our democracy we do actually need  two parties who are both relatively competent in government and who will deliver to the people good governance and sound administration and the real tragedy of the Gillard government is that they have demonstrated that the ALP are not only unfit to govern but also that they are also not going to be capable of providing a respectable or credible  opposition for a a very long time  either.

Gillard (seated) and her most trusted advisers