Reflections on a high-school speech night, or “A modern dodo race” 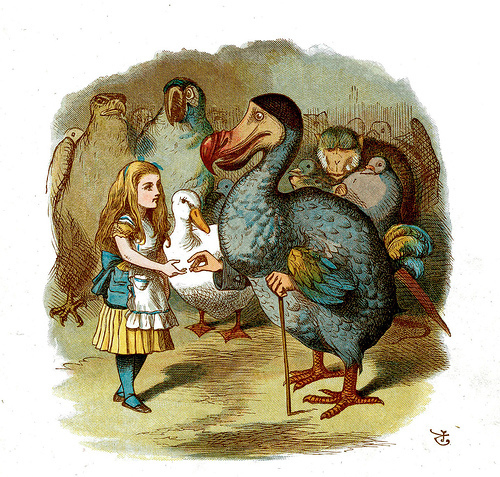 Ah well I’m glad that’s over, the long time sitting respectfully and  the dull propaganda  speeches delivered by those for whom public speaking does not come naturally. was about as exiting as watching paint dry.

The shallow acknowledgement of the “original owners” begun the proceedings. to be  expected I suppose, and the intention is clearly good, to mark the end of the academic year at a high school but do they have to spend so much time bowing and genuflecting to all and sundry? Heaven in a hand-basket why couldn’t  they have thanked the “honoured guests” just once instead of droning through the litany several times? The format of the show was dullness incarnate and even the able bodied were sitting in their chairs with a sort of stoic endurance.

Our endurance was tested further still by the fact that there seemed to be  a certain Wonderland quality to the desire to find as many reasons as possible to bestow prizes on as many students as possible. While I appreciate that this may be encouraging to those of lesser ability the mere fact that so many received “merit awards” surely devalues the citation of those students who have actually excelled at their studies, frankly if there was not the insistence that everyone should have a prize the evening would have been more enjoyable. But no, the doctrines of political correctness requires that all must have prizes and it is we poor suffering parents who end up with the prize of a sore arse and aching teeth.

There seemed to be a total lack of imagination in the choreography of the event, and I gather that is the tradition at speech nights in general and I just can’t help thinking that it does not have to be like this. Why on earth can’t the lesser prizes be awarded at a school assembly for the sake of brevity at the speech night? Then the awards for excellent academic achievement would be more meaningful, and they would not be lost in the sea of mediocrity  and we, the poor suffering parents, could look forward to this event with joy rather than dread.

In the Wonderland story Lewis Carroll was trying to point out the absurdity of everyone  getting a prize no matter where they come in the race. The point of that tale seems to be as relevant now as it was when Alice emerged from the sea of tears. Sadly it is a lesson that remains incomprehensible to the educators of today.

Oh and in case you were wondering, my daughter received a medal for academic excellence.