Home » Australian Politics » Once were warriors

Like everyone else on the political planet I am appalled when I hear of young people being abused but what I find amusing about the story about the ADF is the contrast between the way that News LTD and Fairfax have written about the just released report. first the report as published in the Courier Mail: 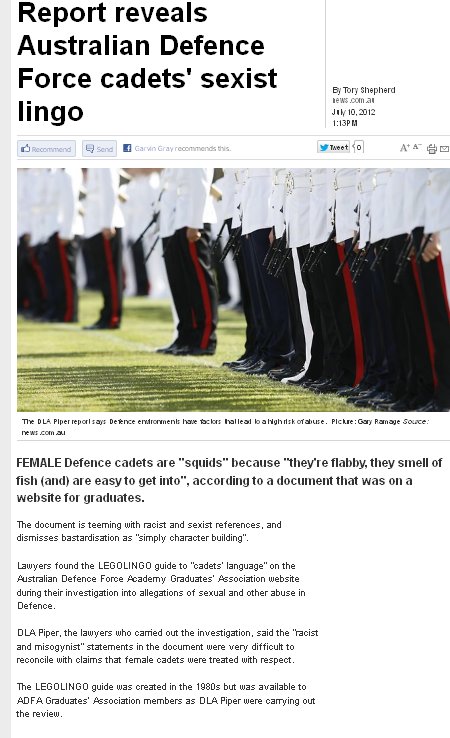 and this is how Fairfax report the same story:

Please take just a few minutes to read both articles I’ll still be here when you get back and then we can consider the difference together.

Now lets get down to tin tacks please consider the two pieces and ask yourself which one seems to have the most politicised agenda here. For me the answer is that Fairfax’s authors are pushing an argument that is antagonistic to the military in general and full of misandry with its provocative  headline. Frankly it seems to me that it is trying to suggest that all soldiers are rapists, Hmm where have I heard that sort of nonsense before? Ah yes its the sort of stuff you get from feminists who insist that there is a “rape culture”  and that every man is a rapist.  either by acts or thoughts.Worse still they primary allegation that inspires the headline goes back to 1951 which means that the alleged perpetrators would have long ago retried from the service.
By way of contrast the news piece concentrates upon a student guide to the unofficial slang and jargon of the academy. Frankly its not really a surprise to me that such a derisive lexicon exists and has currency in the ADF, every military since ancient times has had its own language and way of seeing both itself and the world. the question that this raises to me is just how seriously we should take such a thing and does it matter anyway?

On one hand I am as concerned as the next man about the way that women are treated  within the ADF but on the other hand I can’t help thinking that we expect our military to do some pretty brutal tasks (like kill the nations enemies in our name) so that requires a certain level of  mental toughness  that getting all PC and protective of new recruits is not going to engender. The aphorism about heat and kitchens comes to mind here. Is there a way of protecting the ladies who take the Queens shilling without making our military a bunch of wooses who are so frightened of causing offence that they are useless in their primary role of fighting for the country? That is the issue as far as I’m concerned. While I am all for and full of respect for any woman who is at heart a warrior and wants to do her bit to defend the wide brown land I am far less keen on the idea of women at the pointy end being protected and pampered to pander to feminist notions that gender is a construct and that traditionally male preserves like the military should be changed to make them more female friendly. If a woman wants in to the military boys club then it has to be on the same harsh and brutal terms as her male counterparts  or she just does not qualify to be a warrior for our nation.