Home » AGW and climate change » The question that Gillard has to ponder: Is it better to face execution with dignity or do you want to be dragged kicking and screaming to the gallows?

The question that Gillard has to ponder: Is it better to face execution with dignity or do you want to be dragged kicking and screaming to the gallows?

I don’t know sometimes if I should feel joy or sorrow at the state of the ALP’s fortunes. Part of me clearly takes great delight at every misstep and stumble from this increasingly desperate regime. Another part of me wants to see some “balance in the force”* so that we can have a reasonable brake upon the excesses of either side of politics but one thing that I do believe is that the ALP can’t realistically expect to win at the next election and that if they do stay in power until the last possible moment they are likely to increase the amount of time that the party is consigned to the wilderness. To put this reality into the parlance of war Labor need an exit strategy that allows them to live to fight another day and just hoping that things will improve if they wait long enough  is not really an option for a party that wants a chance to govern again sooner rather than later. In this morning’s Oz there is a report of Labor setting up a re-election committee and the suggestion that Gillard may go earlier than most pundits think: 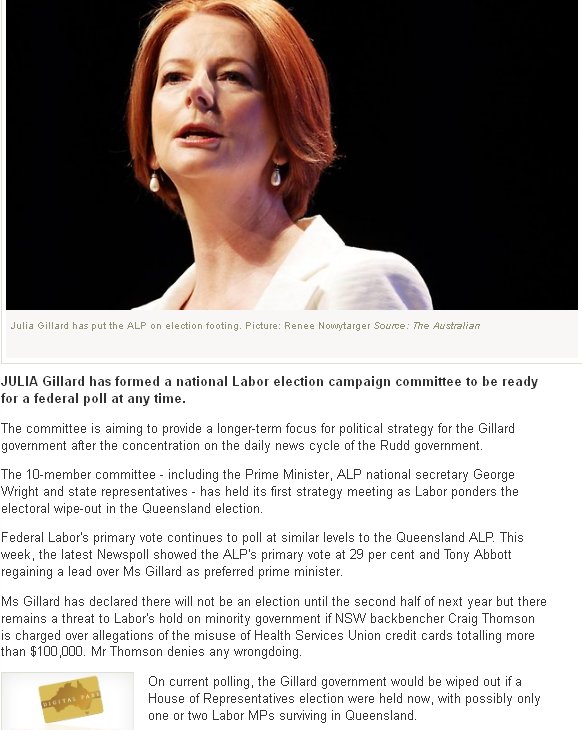 Of course I think that the ALP have long passed the tipping point beyond which resistance is futile, so all that remains for Labor is the question of retaining enough of the dignity of the party so that it can carry on after its inevitable  defeat. Part of that would have to be making sure that federally we never see the sort of disastrous “oh please don’t thrash is too severely ” pitch run in the dying days of the Bligh government it is just a strategy that won’t save votes. When the end is inevitable its better to face it with some humility and grace than snivelling and begging for your life. I think that most criminals on death row get this and maybe even Gillard can see the value of going to her political death at a time of her choosing rather than letting something like the Thompson corruption Cancer, the Carbon tax or the NBN blow-outs to destroy all of her political capital and consign the party to political oblivion forever .

*My son has just enjoyed a Star Wars marathon and it rubs off on you after a while.