Brendan O’Neill speaks sense on Gay marriage in the OZ

A great piece today in the Oz from my favourite Marxist Brendan O’Neil  where he succinctly explains why some otherwise sensible conservatives are taking the plunge to support this seemingly innocuous  err, cough, splutter, “reform”. 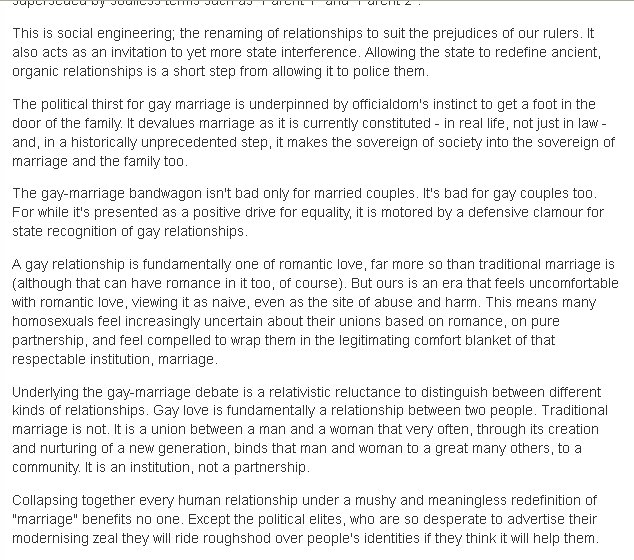 Of course I expect that our learned friend will be onto this piece like a starving hound would be onto the fox, with a great deal sound a fury (signifying nothing) but we only have to look to Canada to see just how bad the repercussions will be if this so called reform is ever to be made manifest if  the activists and fag hags ever  get their way.
So lets leave the marriage   well enough alone and if homosexual relationships need any sort of legal recognition and social acknowledgement then lets do it through other legal and social instruments like some sort of civil union or relationship register.

I have just read the revelation in the Oz that Tony Abbott’s sister is herself both Gay and in a committed relationship and more importantly that this has not meant that she has become persona non grata at the Abbott household where she has been welcome with her partner on numerous occasions.

Isn’t this a perfect example of just how wrong it is to insist that those who oppose the concept of gay marriage do so because they hate or fear homosexuals?

As predicted our learned friend has produced a rant about Brendan’s piece in the OZ and also as predicted he is very hound like in his he desire to attack and maul the fox here but I think that he has just ended up with a mouth full of straw and dead air: 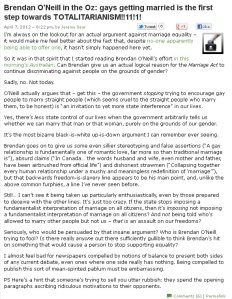 Now I am actually a student of our learned friend’s rhetoric and usually he tries to at least find something in the text which he can twist and turn to his purposes but on this occasion he goes one step further and totality invents and argument that O’Neill is not even making:

O’Neill actually argues that – get this – the government stopping trying to encourage gay people to marry straight people (which seems cruel to the straight people who marry them, to be honest) is “an invitation to yet more state interference” in our lives.

Yes, there’s less state control of our lives when the government arbitrarily tells us whether we can marry that man or that woman, purely on the grounds of our gender.

It’s the most bizarre black-is-white up-is-down argument I can remember ever seeing.

I may be wrong, but after reading the O’Neill  piece in question five times I can’t find where he argues this at all. of course Our leaned friends fans uncritically accept his argument without question

Worse still our learned friend totally misrepresents O’Neill’s actual argument as well by a mixture of selective misquoting and derision:

Brendan goes on to give us some even sillier stereotyping and false assertions (“A gay relationship is fundamentally one of romantic love, far more so than traditional marriage is”), absurd claims (“In Canada… the words husband and wife, even mother and father, have been airbrushed from official life”) and dishonest strawmen (“Collapsing together every human relationship under a mushy and meaningless redefinition of ‘marriage’”), but that backwards freedom-is-slavery line appears to be his main point, and, unlike the above common furphies, a line I’ve never seen before.

If our learned friend had actaully done some research about the situation in Canada he would discover that there is nothing  made of straw or dishonest about the way that official nomenclature has been altered in reference to family and parental roles in the wake of gay marriage there. Unlike our learned friend  Brendan O’Neill actaully knows what he is talking about when it comes to the situation in Canada.

The rest of Sear’s rant is just his typical foaming at the mouth wild hound dog  raving he is desperately trying to get a mouthful of that O’Neill fox  but all he has managed to get is teeth around is a few handfuls of rather rank  straw. In typical totalitarian style he declares himself winner as if asserting something will make it so and all the while the fox is sitting there doing a bit of indifferent grooming and leading the chorus of laughter at our learned friend’s foolishness. What a lovely way to wake up to a beautiful day!