Home » Blogging » Liam Jurrah; payback may be a bitch but there comes a time when that bitch has to be brought to heel.

Liam Jurrah; payback may be a bitch but there comes a time when that bitch has to be brought to heel.

For our friends of the left there is a rather strange disconnect between the heart and the mind when it comes to the social  behaviour of our indigenous people. They seem to be willing to accept any sort of nonsense on the basis that its part of “traditional” culture and therefore beyond any sort of criticism. This seems very much to be the case when it comes to feuds that saw the south Australian  government arranging convoys of buses to take people to safety or when a high profile AFL player is involved in serious violence that pertains to the pernicious culture of “payback”. 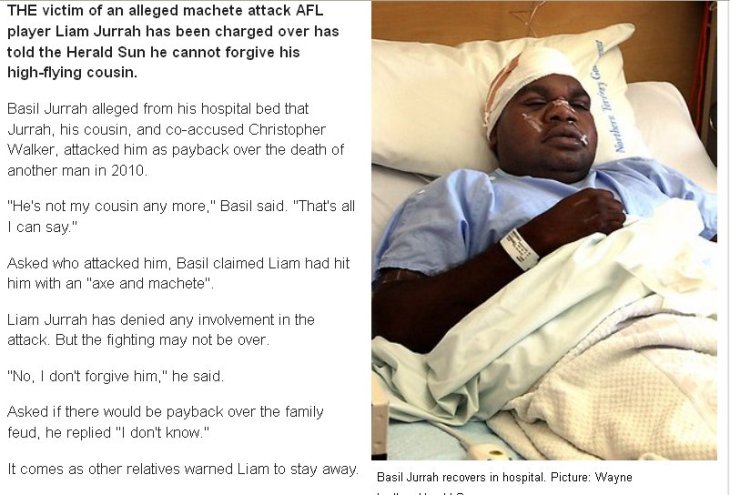 The concept of “payback” may have had some value in an older and more brutal epoch but we have to ask ourselves why it should be tolerated in the twenty-first century, for the minions of the left its considered a no brainer because they want to be so inclusive and accepting of indigenous culture however I just can’t see that the cultural practice and its endless cycle of violence should ever be acceptable. The question remains though how can this ancient practice be consigned to the dustbin of history?

As far as I can see there needs to be a two pronged approach, firstly the kid  gloves have to come off and any instances of “pay back” should be universally condemned and punished to the full extent of the law, rather than being excused or ‘explained’  by those who are so vocal on indigenous issues. They   have to find their voices and make it clear that the age of “payback” is over and secondly there needs to be some serious work done on education about what is acceptable behaviour and ways to resolve interpersonal conflicts in our modern culture in all of our schools the churches and our society in general.