Tesla Roadster, failed court action, a fat bloke, a test track, and the folly of a carbon tax pork barrel

I am among those who are totally under-whelmed by the plug in electric car entirely for one simple reason their range and recharge times because until they can be re charged as quickly and effortlessly as an ordinary car can be refuelled there is no way at all that they can be a viable form of transport for anyone except the most obsessive Global warming tragic or Eco-wanker. With this in mind I am delighted to see that Top Gear have once again won the case brought by Tesla about the less than flattering test of their roadster that saw it grind to a halt after a paltry 55 miles around the track. 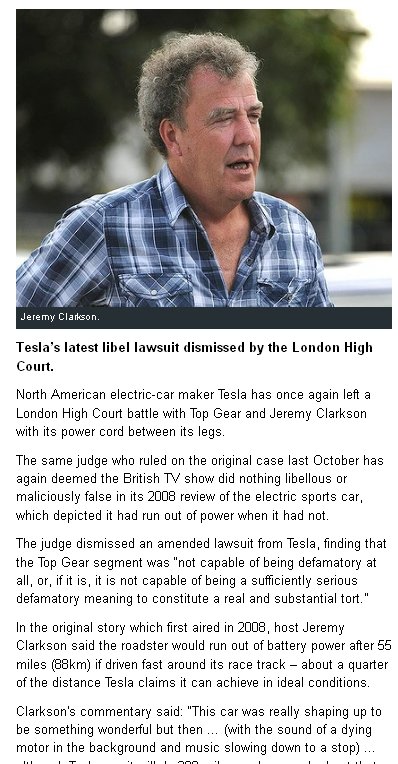 This case is , to me a great example of a victory of truth (even the massaged truth of a tongue in cheek television program)over a manufacturers’ attempts to spin the irrefutable facts about their product, heck any one would think that the management of Tesla motors were the same mob who have been working for the Greens and the ALP trying to convince the Australian people about the efficacy of the Carbon tax…
Because like the Tesla Roadster Labor’s  Carbon Tax promises a great deal but its performance is going to disappoint, it will prove to be a market failure. The irony that Gillard and co are claiming passing the enabling legislation is one of her government’s successes should go down as a supreme example of delusional thinking. Like the way that the Labor crew think that their compensation package for said Carbon Tax is going to buy them votes. While many will cheer as they get their chance to dip into the pork barrel of compensation I very much doubt that a significant number of those recipients of government Largess are going to decide to vote for Labor as a result.

I did try to write a post this morning that was not about the vices of our current government but sadly I have failed and I just hope that our dear readers will forgive the  weakness of my resolve here..