Queensland Labor in the Wipeout zone

A Labor Member is pushed rather than jumping like nine out of fifty one have already done.

The outlook for Labor true believers up here in Queensland is rather grim as they watch the unedifying example of their state MPs deserting the sinking ship under the captaincy of Anna Bligh. The latest is Julie Attwood who cites the illness of her husband as the reason: 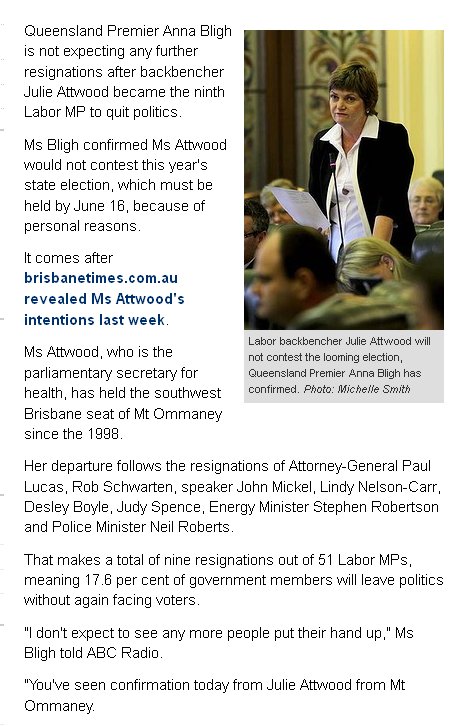 Nine out of fifty-one! struth that’s a really bad set of numbers for Bligh and the election has not even started!

I was chatting to my brother other day and he was telling me that the reason that Bligh is putting off the election until the last possible moment is that Labor are having the hardest time imaginable finding anyone to put their hand up to be candidates for them at the next poll. Ponder than for just a moment, a major party with such bad prospects that it can’t put up enough candidates in every seat for the election. That is truly a party headed for the wipe out zone…

the ALP re-election committee on a bonding exercise

By Iain Hall in Australian Politics, Leftism, Queensland on January 19, 2012.
← Warnie vs cyclists Bad idea to change the constitution if that change is ultimately divisive →