Bob Brown’s Paranoia about the USA

If  Greens like to think that they are a party of the future why is it that their thinking is so much in the past? Take Bob Brown’ intention to make a fool of himself when we have the long awaited visit from Barrack Obama. Not that making a fool of himself is anything new for our Bob, he does so every time he goes on like pork chop about just about everything. The thing that I find truly stupid is that he really seems to believe that being a snivelling coward on a global scale is in  Australia’s best interest. 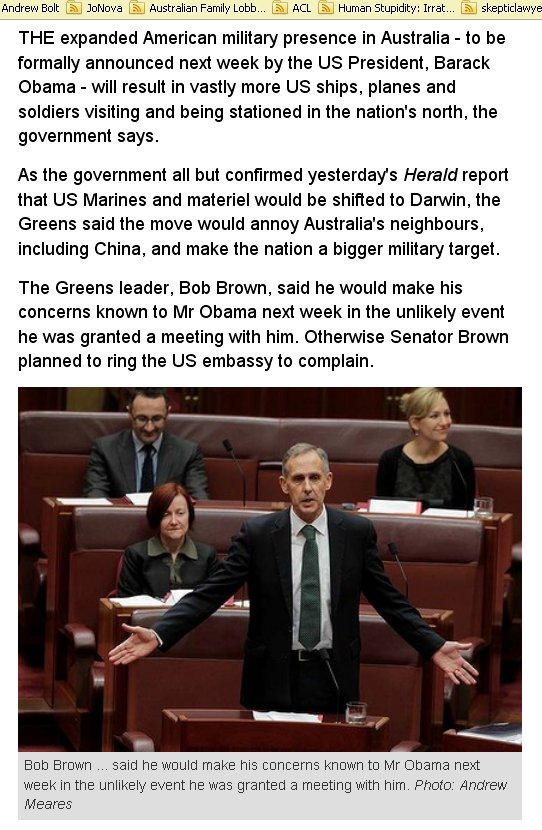 The global reality is that this country won’t be attacked by China or by our nearest neighbour either because we make our long-standing alliance with the USA stronger and more overt Islamic Jihadists will still hate us and consider us a viable target (think of the bombing of our embassy in Indonesia and the Bali bombings) so nothing changes in any real sense. The Chinese clearly realise that they can achieve the hegemony that they so clearly crave through the use of their factories and their under-priced currency, Indonesian lacks the ability to invade, or even attack us, India well its far to obsessed with its eternal struggle with Pakistan to even consider attacking us. So just where does Bob see the “increased threat” coming from?

Maybe the Greens leader has been enjoying too much of another kind of “Greens” and that smoke coming from the chimney of his cottage was not in fact coming from a heating fire at all. There must be some reason for his silliness …