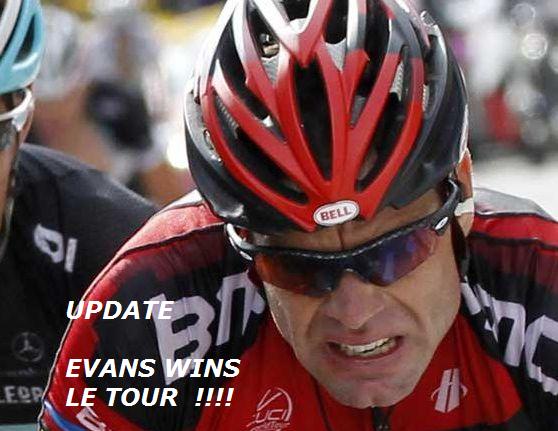 Let’s take a break from all the usual political argy bargy (and personal attacks from anons) and turn our attention to a really uplifting and (potentially) magnificent achievement that is about to culminate around midnight tonight when Australia’s ‘road warrior’, Cadel Evans, attempts to take the coveted Le Tour de France title in what is effectively the last stage of this truly gruelling, gripping and incredible test of strength over 3 weeks and more than 3,000 kms, including scaling The Pyrenees and The Alps to heights of nearly 3,000 metres. Think about that!

No Aussie has won this event before in its more than 100 year history, and apart from USA’s Lance Armstrong’s 7 consecutive wins in recent times (which I regard as suspect) and Floyd Landis’ win in 2006, which was more than suspect (he tested positive and had the title stripped), the race has always been won by European riders. Let’s face it, until Armstrong came along  – after receiving steroid treatment for testicular cancer – it was mainly a European event. But now, in my opinion, the annual Le Tour is the world’s premier sporting event, even exceeding the standing, attention and status of the FIFA World cup, the Olympics and, errr, the AFL Grand Final.

Cadel Evans sits third, just 57 seconds behind Luxembourg rider Andy Schleck and just 4 seconds behind Andy’s brother Frank. Tonight’s stage is an individual time trial over 42 kms where the riders go out one at a time to race the clock, as opposed to a road race, which most legs are. It’s effectively the last leg because the next one is a procession into Paris and traditionally the leader (in the famed Yellow Jersey) is not attacked on that leg and just pedals in to stand on the podium in front of Le Arc de Triumph to claim the crown – and the worldwide honour and adulation as a HERO.

And Cadel Evans is a renowned and world-class time-trialler, whereas the Schlecks are not. He just might do it, in fact he’s favoured to. And if he does, no one will deserve it more after being an unlucky runner-up in 2007 & 2008, then failing in 2009 when he started as the favourite and took the lead but, ultimately, lacked team support. In 2010 Evans fractured his arm early in the race but still rode it out to finish 17th overall. At age 34, his performance in this year’s race has been incredibly consistent, winning stage 4 by beating off 3 times champion, the highly suspect Alberto Contador from Spain. Contador is only in the race subject to appeal against a positive dope test when he won last year’s event. I reckon if it’s proved true, he should also be stripped of the 2007 title and that then be awarded to Evans.

But that’s another story. Evans has burnt off Contador this year and also the heroic French cyclist Voeckler, who held the lead until last night. Now only the Schlecks stand in his way of what would be the greatest sporting achievement of any Australian in history.

Make sure you stay up and watch it. Cheer ‘our boy’ home. That includes you, Iain.

“If you don’t get excited by this and stay up all night getting pissed and rooting for Cadel (yes you can have sex in the lounge room while you watch it) then you are just proving your unAussieness and you should be deported or detained in Nauru with all the other non Aussies.”

By Ray Dixon in Guest post on July 23, 2011.
← Bombing in Oslo Amy Winehouse, heroin or ham sandwich time arrives, like, who didn’t see that coming? →