Home » Australian Politics » This was bound to happen sooner or later

This was bound to happen sooner or later

I must say that this sad event shows that the state government is not really that serious about protecting the Great Barrier Reef, so for the cost of insisting that ships are under the guidance of a pilot we now face a truly devastating environmental disaster. 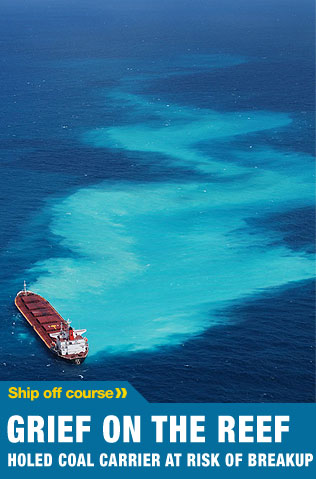 Premier Anna Bligh yesterday said “a very serious” investigation would be launched into how the coal carrier came to be more than 15 nautical miles away from the nearest shipping lane in a restricted zone.

Maritime Safety Queensland had concerns the ship could break apart, which would most likely result in an oil slick reaching the coast at Shoalwater Bay. “Where the ship is at the moment, it would be very difficult for it to actually sink because it is on the ground, but it is in danger of breaking its main structures and breaking apart, which is a serious situation,” Maritime Safety Queensland general manager Patrick Quirk said.

The grounding has raised questions about maritime safety around the marine park after it was revealed the ship was not required to carry a pilot and was not being tracked at the time of the accident. Mr Quirk said the Shen Neng 1 could have been warned of the danger if a second Vessel Traffic Service – the marine equivalent of air traffic control – had been in the area.

What precisely was the captain thinking ? In these days of GPS and modern navigation aids how on earth could he have been so far off course?

So obviously the next step would have to be working out a way to take off the nearly 1000 tons of heavy fuel oil that this ship has aboard followed by its cargo… I don’t know if that is even possible. But one thing that we all know is that all levels of government are responsible for this and if they do not make a very big effort to digitus extractus then this disaster is going to get worse by many orders of magnitude.

By Iain Hall in Australian Politics, China, Federal politics, Living with Nature, Queensland, World Events, WTF??? ERR??? on April 5, 2010.
← A Minister for population The 2010 federal election will be decided on body shape and sex appeal →