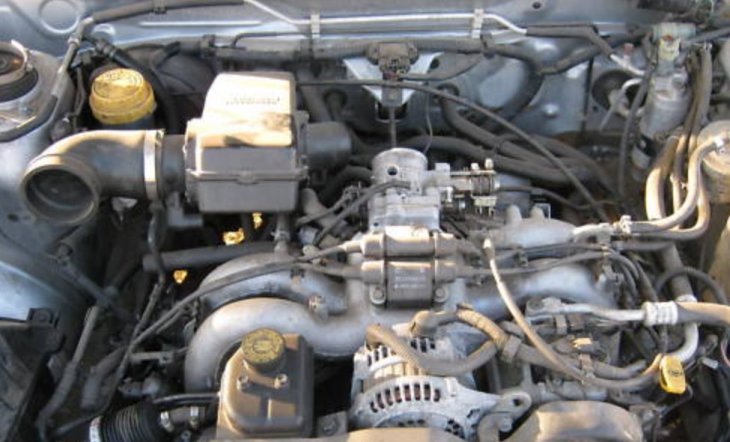 As I found the engine bay

It looks like another showery day is likely here at Chez Hall and this will undoubtedly mean that my beautiful wife’s visit to The Woodford Folk Festival is going to be a soggy one, but she is very determined to go  as she has each year for a while now. Definitely a day for the stout ( and water proof) walking shoes I think!

I will be spending the day trying to fit the replacement engine into the Subaru that I have bought I know that i have plenty of time to get the car sorted but I want to return the block and tackle to my mate around the corner sooner rather than later. I have had to remove the R/H head because the engine would not turn right over and that meant that I could not undo all of the bolts that hold the flex plate to the torque converter . I turned out that having blown its head gasket that water got into number two cylinder and the bore was caked with rust preventing the piston from going up to the top of the bore, a bit of scraping and some firm pressure on the spanner attached to the crankshaft nut solved that particular problem. Now that I have the engine out the next step is to remove the flywheel from the “new ” engine and replace it with the drive plate from the original so that it will work with the transmission.

I am wondering if I will be able to get away with re-using the exhaust flange gaskets I think that it should be OK  but if it isn’t it is no biggie (just six M10 nuts to replace them). So far I have a short-list of parts to get from Subaru and I plan a parts run next week so getting this car going may be quicker than I thought , have to visit the wreckers to replace the missing intake hose (that goes from the throttle body to the air box ) as the airflow meter is attached to the air box the engine will not run at all without it. Also needing replacement are the steering rack boots which are better replaced with new I think.

Well its time to go and swing the spanners so I’d better get to it!

By Iain Hall in Cars, Domestic life, Living with Nature, Music, Petrol Head Heaven, Popular Culture on December 28, 2009.
← Thank God for the incompetence of evil men For my lovely daughter →